The adage, “Truth is stranger than fiction,” gets a powerful jolt in the arm with the appearance of To Remain A Jew, an incredible memoir of growing up during communist Russia’s darkest days, written by Rav Yitzchak Zilber zt”l, a pioneering leader of Russian Jewry in Israel for over three decades.

In the aftermath of the Russian Revolution in 1917, life for Jews became increasingly impossible. Over time, Jewish communities were dissolved, properties were confiscated, yeshivos and chadorim were shut down, religious study became prohibited, and it was forbidden to print any Jewish books. To remain a Jew became all but impossible, and if you were “caught in the act” of living as a religious Jew, the consequences were terrifying. Jews were reported and carted off for the most minor of infractions, even imaginary ones.

Rav Yitzchak Zilber was born just months before the 1917 revolution, and all he experienced for most of his adult life was the inhumanity, tyranny, fear, hardship and suppression of daily life under communist rule.

When you stop to consider, you realize that every aspect of Jewish life – kosher food, learning Torah, prayer, keeping Shabbos, bris milah, raising children – becomes a challenge, an uphill, daily struggle for survival, fraught with relentless danger. And so it was.

Rav Yitzchak was taught Torah secretly by his own father, a talmid chochom and the rov of Kazan, where they lived. As a teen, he himself taught Torah clandestinely; he later attended the University of Kazan where he became a famed mathematician. He married, had four children, and after World War II was imprisoned in Stalin’s gulag for teaching Torah. The family was finally allowed to emigrate to Israel in 1972, where he devoted the rest of his life to teaching and influencing Russian Jews. 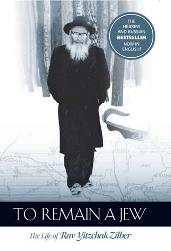 Every page of this extraordinary book, every step along the way in this amazing journey, is filled with unbelievable episodes, challenges and confrontations, and the fact that the author is a gifted, personable storyteller makes this a book that is virtually impossible to put down. Insights and events move rapidly along and, as you read, you’ll come across a remarkable array of memorable personalities – members of the author’s family, his wife’s family, neighbors, teachers, fellow Jews and non-Jews, fellow prisoners, those who made life a bit more bearable and those who made life unbearable. It is a spellbinding story filled with character, intrigue, adventure, Hashgachah protis, and a persistence of faith against incredible odds.

On a grand scale, this really is a Dovid and Golias narrative – of how one man (along with many others) took on a vicious, totalitarian state and emerged victorious.

Today’s entertainment industry puts forth its own glamorous ideal of a “superhero.” They usually don masks, sprout wings, wear suits of armor, and defy the laws of gravity. Entertaining? Perhaps. Superheroes? Absolutely not. However, in our own real world, we do have our own true superheroes. They are grounded in reality, and very often must undergo the most trying of circumstances. Rav Yitzchak Zilber was such a figure, except that we also have our own word for it as well. He was a tzaddik whose life, through faith, courage, perseverance and self sacrifice, became a source of inspiration to us all.

Reading To Remain A Jew, you cannot help but become a changed, more appreciative, uplifted person. If anyone is still compiling lists of “required reading” titles, here’s one that should certainly be added.