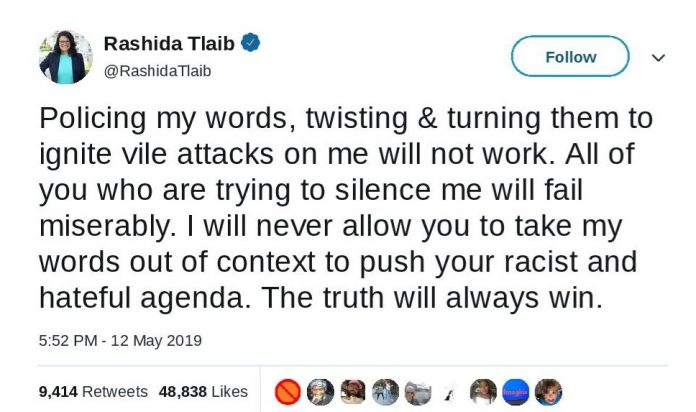 Rep. Rashida Tlaib, D-Mich. was blasted by President Trump and his fellow Republicans after saying in an interview that it gave her “a calming feeling” to think of her Palestinian ancestors giving up their lives and their land to create a safe haven for Jews fleeing the persecution of the Holocaust.

On Monday, Tlaib accused Trump and GOP lawmakers of “spreading outright lies” about her.

“The Holocaust was a horrific persecution of Jewish people and should be remembered as such, nothing short of that. While I conveyed these sentiments during Yahoo’s Skullduggery’s Podcast, it’s shameful that right-wing extremists and GOP leadership, including President Trump, have twisted and misconstrued my words to spread falsehoods rooted in hate,” Tlaib said in a statement Monday.

“Trump has doubled down on his party’s use of the Holocaust to score political points,” she added. “This is yet another attempt by the administration and the GOP to try to distract from their horrible policies, lawless acts, and actual anti-Semitic rhetoric.”