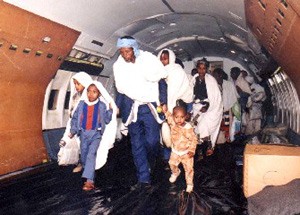 The November 4th edition of the Times of London includes a review by David Aaronovitch of a new exhibit at the Jewish Museum in London titled Blood: Uniting and Dividing.  Aaronovitch explains that the exhibit explores the subject of blood through the lens of Jewish religion, culture, history and antisemitism.

Though the review mostly deals with the exhibit’s focus on the way in which blood has been used to demonize and vilify Jews, Aaronovitch also notes the following:

To its credit the exhibition also reminds visitors that in the 1990s the Israeli blood donation services took blood from Ethiopian immigrants, then routinely discarded it for no other good reason apparently than the race of the donors

However, as my colleague Hadar Sela has demonstrated, the definitive report on that incident by former Israeli president Yitzhak Navon, which was undertaken in 1996, found that the disposal of Ethiopian blood donations during that time was not motivated by race. Rather, it was merely a failure by the blood services administrators (MDA) to update an earlier (medically sound) directive from 1984, which related to the fear of spreading Hepatitis B, Tuberculosis, and Malaria.

The Navon report concluded that “at the time the health services were worried by findings connected to the prevalence of diseases such as Malaria, Tuberculosis and Hepatitis among the Ethiopian immigrants from ‘Operation Moses’.”

The Commission ultimately concluded that Israeli public health officials acted out of purely professional motivation, “without any trace of racism” toward Ethiopian immigrants.

Sela (who worked for decades as a community nurse) also reminded readers that the risk of the transmission of HIV through donated blood was first recognized in the early 80s and standardized testing of blood donations for HIV (and Hepatitis) began around 1992. Israeli authorities, Sela argued, were motivated by the need to address the very real international problem concerning infectious disease transmission through blood transfusions. To this day, you can’t be a blood donor in Israel (regardless of your skin color) if you’ve lived in a country in which Malaria is endemic until three years have passed by since leaving that country — as well as for a whole list of other reasons.

Of course, it should be noted that other countries, such as the US, have similar prohibitions on donating blood if you were born or have ever lived in some African countries that have a high rate of HIV infection.

Bottom line: there appears to be no evidence to support Aaronovitch’s claim that, in the 90s, Ethiopian blood was discarded due merely to “the race of the donors.”