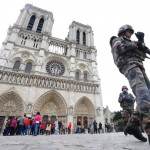 France – Gunmen and bombers carried out a wave of attacks on restaurants, a concert hall and near a sports stadium across Paris on Friday in a deadly rampage claimed by Islamic State that killed 129 people and wounded 352, of which 99 remain in a critical condition.

Following is a timeline of the events in local time (GMT +1) given by French prosecutor Francois Molins at a news conference today.

Friday Nov 13
2120 – A suicide bomber activates an explosive belt near a gate of the sports stadium Stade de France in the northern suburb of Saint-Denis, where President Francois Hollande and the German foreign minister were watching a friendly soccer international. The explosion killed the bomber and a passer-by.
Advertisement:

2125 – In the 10th district of Paris, at the crossroads of rue Bichat and rue Alibert, gunmen shoot at clients sitting on the terraces of the “Le Carillon” bar and the “Petit Cambodge” restaurant, killing 15 and severely injuring 10.

2130 – Outside the Stade de France, a second suicide bomber detonates a bomb, killing himself.

2132 – Gunmen open fire in front of the bar “A La Bonne Biere” at the intersection of rue Fontaine au Roi and rue Faubourg du Temple in the 11th district, killing five people and severely injuring eight.

2136 – Gunmen kill 19 people sitting on the terrace of the restaurant “La Belle Equipe” in nearby rue de Charonne. Nine people are also severely injured.
Around 2140 – A suicide bomber kills himself inside the restaurant “Le Comptoir Voltaire” on boulevard Voltaire, also in the 11th district, injuring one person severely.

2140 – A car stops in front of the nearby Bataclan concert hall. Several gunmen enter the theater during a concert (of the Eagles of Death Metal rock group) and shoot indiscriminately at the crowd, killing around 89 people and wounding many. The attackers make verbal references to Syria and Iraq.

2153 – A third suicide bomber kills himself near the Stade de France.

Shabbos, Nov 14
0020 – Security forces launch an assault at the Bataclan concert hall to try and free those inside. Three of the attackers are killed: one is shot and the other two kill themselves using their explosive belt.