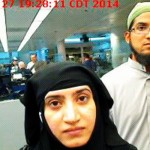 There are 18 minutes in the deadly San Bernardino attack timeline in which the two shooters are unaccounted for, the FBI said.

The time period is more than two hours after the couple launched a brutal assault on a holiday gathering, killing 14 people.

Bowdich appealed to the public for any photographic or electronic evidence that could lead to explanations of the couple’s location during the gap to be “absolutely certain” of their activities before they were killed in a shootout with police. Read more at USA Today.