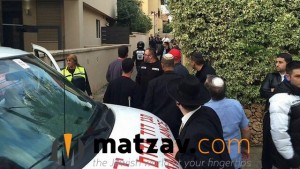 Three Israelis were stabbed in Ra’anana on Shabbos afternoon. The suspected terrorist was arrested by police.

Magen David Adom paramedics treated a seriously injured 40-year-old man and a lightly injured woman on Anielewicz Street in the town north of Tel Aviv. Another woman was lightly injured a block away.

The attack took place in a residential neighborhood, with the terrorist first trying to enter a house, then attacking the man in the street, knifing him in the stomach, and then moving on to a shul in a public park, where he attacked a women, Ilana Abergil, who was at the shul preparing a meal.

He fled, lightly injured the third victim, and was finally caught.

Two of the injured were taken to Meir Medical Center in neighboring Kfar Saba. The man was said to be stable and not in danger after surgery late Saturday.

Police officers apprehended an Arab man suspected of involvement shortly afterwards during a search of the vicinity. Police were reportedly searching the area for a vehicle suspected of being involved in the attack.

The man was later identified as a 20-year-old Palestinian man from a village near the West Bank city of Jenin, who was illegally in Israel, the army said. He was believed to have an accomplice who drove him to Ra’anana and fled the scene.

The suspect told investigators that he carried out the attack as revenge for the death of a relative, according to Walla news.

Ra’anana Mayor Ze’ev Bielski told residents to remain in their homes — apparently referring to potential protesters. “After an incident like this there’s no need for [public] gatherings,” he told Army Radio. Read more at Times of Israel.