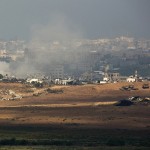 A hit and run terror attack took place in Beit Anan, near Chevron. Three border policemen were injured along Route 60. One of them was critically injured while the other two were slightly hurt.

The terrorist fled the scene of the crime. Israeli Security Forces opened fire and conducted a man hunt for the terrorist.

Magen David Adom head Eli Ben told Channel 2 News that the Israeli who was critically injured was hit in the head but is conscious. The wounded were treated on site and evacuated to a local hospital.

MDA paramedics Benny Tanna and Hagai Wingush stated: “When we arrived, we saw three young people that were conccious. They were lying injured in the square suffering from injuries in the head and the body. We put them in ambulances and evacuated them to a local hospital. One of them was critically injured. The others were slightly injured. They spoke to us and told us about their injuries.”