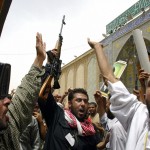 Three Americans have been kidnapped by militants in the Iraqi capital city of Baghdad.

According to Arab news channel Al-Arabiya, well-informed sources in Baghdad have confirmed that the kidnapping took place in the south of the city today.

The Independent reports that the US State Department confirmed it was aware of the reports, and said it was working with Iraqi authorities to locate and recover the missing Americans.

The identities of the kidnap victims or the militias have not yet been confirmed.