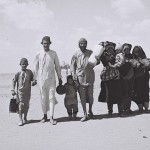 Gamliel said the ceremony corrected the lack of acknowledgment of the suffering of more than 800,000 Jews who were forced to flee or were expelled from Middle Eastern and North African countries in the 20th century.

“We will work to introduce Jewish heritage from Arab countries and Iran to the Israeli education system,” she said.