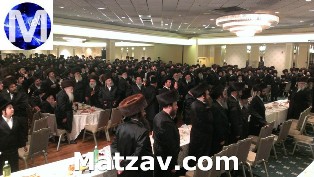 Two siyum events, celebrating similar achievements but thousands of miles apart, drew masses of participants from various backgrounds. While the two occasions were linguistically and geographically distant, they both stood out as an extraordinary tribute to the memory and vision of Hagaon Rav Meir Shapiro, who founded the Daf Yomi learning program 90 years ago.

At the first event, an overflow crowd of close to 1,500 Yiddish-speaking participants gathered Motzoei Shabbos Vayerah at the Atrium Plaza in Monsey for a sit-down melavah malkah and siyum. Organized by the Daf Yomi Commission of Agudath Israel of America in conjunction with numerous major kehillos in Rockland County, the celebration was made possible by a group of energetic young askanim who worked tirelessly to make the event a success.

“Even with the siyum being held in this large a hall, and after adding additional space during the program, at times we had standing room only,” said Rabbi Avrohom Nisan Perl, Director of the Torah Projects Commission of Agudas Yisroel, and main organizer of the event. “Throughout Rockland County we have thousands of lomdei Daf Hayomi, at dozens of venues, so it is no wonder that so many came to celebrate.

HaRav Tuvia Wetenstein, Dayan of the Belzer community in Monsey, introduced the evening by reading a letter from the Belzer Rebbe, written exclusively for the occasion.

Harav Yisroel Hager, the Rav of Vizhnitz in Monsey and a son of the Vizhnitzer Rebbe, was mesayem the mesechta. He spoke about the meaning of having a daily obligation to learn the Daf. The Rav related that when he was a young bachur he decided to learn a blatt Gemara every day. After a couple of years, a new cycle of the Daf Yomi started, and this presented him with a dilemma of either keeping his own seder or starting anew with the rest of klal Yisroel.

His father, the Vizhnitzer Rebbe, encouraged him to ask his maternal grandfather, the Skverer Rebbe, zt”l. “My Zeideh, zt”l, asked me, ‘why not keep both sedarim?'” the Rav said.

After the siyum the entire crowd joined the dais in joyous dancing, led by the inspiring “Meshorerim” choir of chassidic singers. The group, accompanied with music, sang classical melodies extolling Torah learning throughout the evening – including one that was composed by Rav Shapiro, zt”l.

Following the dancing, Harav Yisroel Hager, the Vizhnitzer Rebbe of Eretz Yisroel, spoke about the need to learn Torah with pure intent. The Rebbe pointed out that Gemara is not an academic subject to be studied as any other subject. One must rather learn it with devotion to Hashem.

“Someone once told the Sanzer Rav that he learned a few masechtos,” the Rebbe related. “The Rav asked him, ‘but what did those masechos teach you?'”

“One who learns Torah must internalize its teachings, so that the lessons become part of his very being,” the Rebbe added. The Rebbe then quoted the words of his grandfather, the Imrei Chaim of Vizhnitz, during his hesped of Rav Shapiro. The Imrei Chaim spoke of the thousands of blatt Gemara that greeted the Lubliner Rav in Heaven.

The Rebbe, who is a member of the Mo’etzes Gedolei Hatorah of Eretz Yisroel, praised in particular the work of Agudath Israel of America in spreading the limud of Daf Yomi by repeating the words of the Imrei Chaim: that Agudath Israel’s mission is to proclaim Hashem’s reign over the entire world through learning Torah.

The Rebbe was followed by HaRav Yosef Yisroel Eisenberger , Skvere Dayan who  conducted the haschala of Meseches  Shekolim.

Rabbi Gedaliah Weinberger, Agudath Israel’s chairman of the Commission on Torah Projects/Daf Yomi, followed. He retold the story of how Rav Shapiro’s proposal became reality only when the Chofetz Chaim rose in Rav Shapiro’s honor at the Knesiah Gedolah, thus bestowing upon his groundbreaking idea the stamp of approval.

Harav Shmuel Dishon, menahel of mosdos Yad Yisroel of Karlin-Stolin, was the guest speaker. His inspirational drashah was based on the willingness of Avraham Avinu to perform the Akeidah. “The will to sacrifice is deeply ingrained in all the generations since,” said Rav Dishon. “This mesiras nefesh is what sustained the Torah all through the generations though fire and water.”

The next night, Sunday, a siyum program in Mexico City featured a gathering of hundreds of people commemorating the siyum of Meseches Pesochim as well as the 80th yahrtzeit of Rav Shapiro.

The event, hosted by the Daf Yomi Chaburot of Mexico City in conjunction with the Daf Yomi Commission of Agudas Yisroel, featured HaRav Avrohom Schorr, Rav of Khal Tiferes Yaakov of Flatbush, one of the most prominent darshanim in America.

“Harav Schorr made a ‘sort of return’ visit to the Mexican Torah community that just over a year ago, sent some 500 celebrants to the 12th Siyum Hashas at Met-Life stadium,” commented Rabbi Eliyahu Simcha Bamberger, coordinator of the Daf Yomi Commission of Agudas Yisroel. “It is fitting indeed; that Rav Schorr’s inspiring yahrtzeit presentation should originate from the heart of a vibrant Torah community such as exists in Mexico City.”

Rabbi Bamberger, organizer of the Daf Yomi Commission’s world-wide celebration, who accompanied Rav Schorr to Mexico, reports that the Torah community in the Polanco neighborhood of Mexico City is home to a fast growing community. The kehillah boasts many yeshivos that are bursting at the seams, and includes more than 200 avrechim learning in the kollelim of Meor Avraham and Aram Zoba. Every evening, hundreds of balei batim pack the shuls and join the avreichim to learn Torah.

Rabbi Menachem Juni, Rosh HaYeshiva of Keter Torah in Mexico City, spoke at the event and urged listeners to take learning the Daf to an even higher level. If a lomed picks just one topic in each masechta for deeper understanding, he will, by the time the next siyum hashas arrives, have a deep knowledge of many, many sugyos,” Rabbi Juni said. “That is the essence of becoming great in Torah”

Rav Schorr then delivered an inspirational drasha, praising those in attendance who devote their time to learn the Daf. He mentioned the Ari z”l who interpreted the word Pesach, to mean a guarded mouth. “A Torah person must guard his speech”

Rav Schorr connected the siyum of Pesachim to the learning of Shekalim, saying, “in order for the Torah to thrive in the Holy Land we must contribute our own Shekalim [and not rely on government funds]. We saw recently that even having faith that the US will pay its debts is also in doubt”, the Rav noted. “For the continuation of Torah we must rely on Hashem only.”

As expected, the live broadcast of the siyum in Mexico City drew thousands who viewed the event in more than 40 communities across the United States, Canada and South America.

Notes Rabbi Labish Becker, Agudath Israel of America’s executive director. “We are very excited that so many varied communities participated in these two events for Kavod HaTorah. B’Ezras Hashem, limud daf yomi will continue to grow around the world with even greater participation in future siyumim.”