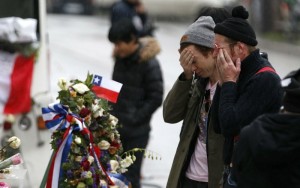 A third suicide bomber who blew himself up at the Bataclan concert venue in the Paris attacks has been identified, according to media reports Wednesday.

Two unnamed French officials told the AP the man was a French national who went to Syria in 2013.

Le Parisien newspaper identified the man as Fouad Mohamed-Aggad, a native of Strasbourg in northeastern France.

Two terrorists who attacked the Bataclan were killed by detonating explosive vests and a third was shot by police.

The other two attackers at the concert venue have been named as Samy Amimour, 28, from Drancy, northeast of Paris, and Ismail Omar Mostefai, 29, who lived in Chartres, southwest of Paris. Read more.