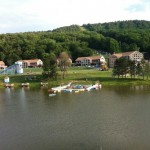 At the time of its release, a Pew report on the state of American Jewry released last October had the Jewish world in a tizzy. “We’re shrinking!” they kvetched. “We’re losing our people!” they shried.

So the bloggers blogged their blogs and the pundits punditted. They exclaimed, explained, and complained, pointing righteous fingers always at others and finally, they moved on to the next interesting topic to come along.

But none of this was news to Oorah,an organization that has been doing Jewish outreach since its inception in 1972. Oorah has slowly but surely awakened Jewish souls in the decades since. Not in a pushy Fiddler on the Roof matchmaker way but by showing people by example what the Jewish lifestyle looks like. (Yes Virginia, it is possible to lead a Jewish lifestyle and be totally NORMAL.)

It’s called “kiruv rechokim,” or bringing those far away from their Jewish roots closerto them.

“I always volunteer during the girls’ first camp session. But some girls stay on for the second session and need to be cared for in the days between the end of the first session and the beginning of the second session. One year I stayed those extra few days to care for the teens that were staying on. I decided to take them to Niagara Falls.

“I did the ‘Cave of the Winds’ tour with the camp teens and my husband and children came along for the trip. I made a rule that I was ‘sweep.’ This means no one’s allowed to be behind me for safety reasons.

“So there I was in my raincoat with my sheitl (wig) dripping wet from the mist, just doing the tour like any other tourist, with my family in tow and the teens up ahead. I noted that some of the teens–and one of them in particular–kept walking back to ‘see if you’re all okay.’

“Suddenly, it hit me. They weren’t coming back to make sure we were okay. They were coming back to see how normal religious Jewish families vacation. They wanted to see that it really is possible for a religious family unit to truly enjoy a vacation together.

“It was an eye opener for me. That one girl in particular just became engaged to a nice solid young man – in no small part thanks to Oorah.”

And thanks, apparently, to the dedicated volunteers who work for Oorah. Mrs. Mintz, who runs the Discover U program for post-high school girls at TheZone, told me that all of the staff members are volunteers. That is to say, none of them draw pay. Not even the married staff.

“I give them a present at the end of the year. But such a present. Do you know what I give them?”

She pulls out a wallet inscribed with “TheZone.”

“This is what they get for all their hard work. A wallet. A nice wallet, to be sure. But a wallet.”

I turned to one of the staff members sitting with us, tow-headed Sarri S. “So why do you do it?” I asked, somewhat puzzled. “Why do all this work?”

“I do it because at other camps, everything is for the staff.

“There are signs: ‘Staff Only,’ and, ‘Not for campers.’ But at TheZone, everything is for the campers.”

The light bulb went on. It’s not about altruism, though altruism was certainly an attribute much in evidence at TheZone. It’s about belief. Everyone at TheZonebelieves in the work being done there.

“We don’t do kiruv with the girls,” said Devora Shira, a division head at Discover U. “We just embrace them. We give them support and acceptance.

Indeed, that seems to be exactly how it works. There’s no pressure. There’s no shock or anger at a short skirt or a stocking-less leg.

That’s because the tolerance you see here is real and it’s there for a reason.

That tolerance is here because of or perhaps in spite of those shocking Pew survey results. Last October, as some Jews freaked, others yawned from boredom, or shrugged, perhaps seeing those Pew numbers as nothing more than the fulfillment of a biblical prophecy: And the LORD shall scatter you among the peoples, and ye shall be left few in number among the nations, whither the LORD shall lead you away (Deuteronomy 4:27).

Oorah, on the other hand, just kept on doing what it has been doing for decades.

Lots of fun. The kind of fun that’s still going strong at 3 AM every single night, as is the staff.

The staff: they are not unlike the Energizer Bunny. And they have kids, at least the married staff do. How they manage is a mystery. The noise from 500 campers at once can be deafening. But the staff just takes it in stride. They are filled with a never-ending supply of creative energy and they are thriving. You can tell.

I ask Mrs. Mintz, “Do you ever have to turn away applicants?”

She says, “I turned away 200 applicants this year.”

I mention this hours later to a staff member who says, “Oh, more than that! A LOT more.”

Mrs. Mintz tells me a story, this time about a different camp where a camper took sick and had to stay in the infirmary for several days. Her counselor didn’t once visit her. Mrs. Mintz narrows her eyes. “If that had happened to one of my campers, I would have fired the counselor on the spot.”

I ponder what it meant to be a volunteer at TheZone. I can understand wanting to be at this beautiful spot away from the heat and the madding summer crowds of the city if it served as some sort of vacation. But it’s a lot of work, being a staff member at TheZone. In no way is it a vacation, though Mrs. Frumie Tyberg, specialties supervisor at TheZone, tells me it’s like being in fifth grade again for a few weeks every summer. Still, it often seems to her as though she lives in two different worlds: the world of TheZone in Gilboa, New York, and her “real life” in Brooklyn. It takes a while to make the transition in the days and weeks after camp each year.

“Even my son finds it difficult to make the switch. He went to a regular camp after TheZone one year and he had to ask me, ‘Ma, what are the rules?’

“He’s used to being a ‘staff kid.’ They stay up all hours, 3, 4 in the morning. Wherever they conk out, that’s their bed for the night. No rules. They have the run of the camp. They run completely wild for these three weeks a year and every summer it’s like coming home.”

But in fact, it’s like never leaving home. The staff stays in touch with the campers long after camp ends. It’s ongoing, continuing year round and year after year. It’s a bond that never ends.

That last Shabbos at the camp, Deena Nahari holds a panel for her Teen Zone campers on self-growth and retention–retaining what they’ve learned at camp. The girls discuss various ways to keep in touch: a conference call via Skype, a Whatsapp group, a reunion, uploading a picture of their bunkmates to their phone screens. Writing emails. And etc. They hope that by staying in touch, they’ll be reminded of what they’ve learned: they won’t lose ground.

Because the lessons they’ve learned at TheZone are not finite and cannot be limited by time. In just three weeks, these campers have forged a connection to their ancestors. It’s a connection between past and present and present and future: a connection to their people. The bonds created between the dedicated staff and the youngsters they serve are about the survival of a people that has survived the test of time, outliving all enemies. It is about a people strong enough to make it.

Pew report? Forget about it.