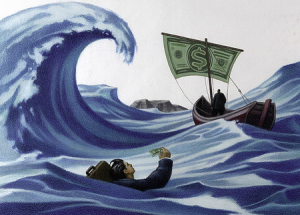 Rabbi David Ozeri touched a raw nerve on Motzoei Shabbos at the recent Agudah Convention. While he hailed the amazing accomplishments of our community, especially in the areas of chessed, he bemoaned the fact that our rabbeim and teachers, the holy people who serve as our shlichim to be mechanech our children, are woefully underpaid.

Rabbi Ozeri told a poignant story that he himself witnessed as a young child attending Yeshiva Toras Emes in Brooklyn. He was once in the office working the mimeograph machine, when he overheard a conversation between a rebbi and a member of the administration. The rebbi said, “I understand that I will not be able to get my paycheck for the upcoming Yom Tov of Sukkos, but could I at least have five dollars of my salary so that I can buy an esrog?”

Rabbi Ozeri lamented the fact that our best and brightest rabbeim and moros are looking for other jobs because they simply cannot sustain their families on their salaries. He especially bemoaned the fact that when it comes to the expenses of making a simchah, particularly marrying off a child, these idealistic individuals are reduced to begging. He quoted Rav Shimon Schwab zt”l, who once said, “Is this a way to treat the greatest heroes of our generation? We have turned them into shnorrers!”

The solution to this terrible problem, Rabbi Ozeri pointed out, should not and cannot be found by turning to the schools or the parents. As it is, the schools are barely surviving in today’s financial environment. Parents are perhaps even worse off. Multiple tuitions and the other costs of frum life today leave the vast majority of parents unable to pay even the tuitions that are presently in place. They certainly cannot undertake more.

“Today,” Rabbi Ozeri said, “we live in a time when there are very wealthy frum Jews. Whereas once upon a time a millionaire was something very unique in our communities, today we have billionaires!” He framed the problem as a pressing need that we, as a community, would have to bang our heads together to try to solve.

Every word that Rabbi Ozeri said was emes la’amito, absolutely true. There is, however, something going on today that goes far beyond what Rabbi Ozeri related. Rightfully or wrongfully, our rabbeim and teachers have always been at the bottom of the totem pole when it comes to wages. They have never been properly compensated for their meleches hakodesh. This is not something new to America. It was the same in pre-war Europe. Not only that, but there is precedent in Chazal for this. In a few weeks, we will read how Yaakov Avinu split up Shimon and Levi as punishment for their campaign against the people of Shechem. The punishment was that he made the descendants of Shimon poor people, sofrim and “melamdei tinokos,” who generally have to travel around in order to earn money.

Again, let me not be misunderstood. Rabbi Ozeri was one hundred percent right, and we should and must give our rabbeim a living wage. It is the most basic obligation that any community has in regard to its klei kodesh.

The Current Problem…Not Limited to Mechanchim

There is, however, something happening in Klal Yisroel today that has never before occurred. It is something that we, as a community, cannot afford, because the fallout and damage may be irreparable.

Until now, the people we would call the “middle class” – the lion’s share of those in our communities – were making it. Sometimes it was with difficulty, but they were pulling through. It is hard to define “middle class,” but for the purposes of our discussion, let us define it as those who are generally able to get through the month, pay their bills, raise their children, and perhaps even take a vacation here and there. We wouldn’t call them wealthy, but they were making a parnassah, earning a living wage, paying their mortgage and getting through the month. The salaries that these people earned would perhaps, in the non-frum world, be considered an upper-middle-class wage.

Today, we have reached a point where even people who can make it through the month when it comes to regular expenses cannot even get close to paying for the weddings of multiple children. Weddings here are not only classified as the wedding night, but rather the whole package, from the vort to the jewelry, the clothing, setting up the young couple, and of course the aufruf and sheva brachos.

Yes, certainly, even in past generations, middle class people needed to borrow some money to get thought the crunch time of making a wedding, but they were, by and large, able to do that and eventually pay back what they borrowd. Today, with large families, multiple weddings, ever-increasing expenses and the raising of the bar, a large segment of average, hard-working households – even those with two incomes – cannot make even “budget” weddings without having to come on to other people for help. I am not talking about asking a parent or a relative for help. Rather, a large percentage have to come on to the general community, either by having someone asking for them or, believe it or not, in many instances, by having to go around to the homes of the wealthy, asking for themselves.

Although those who are younger or not involved in the chasunah scene do not realize what is transpiring today, anyone who has made a wedding or is involved with those making weddings realizes that it is very difficult for anyone but the wealthy to make multiple weddings in fairly close succession and survive without having to beg.

Reducing the average family to begging or borrowing way beyond their means, or resorting to all kinds of get-rich-quick schemes, is a recipe for social disaster. We, as a community, are on a collision course with a social tragedy, a tragedy that threatens the very stability and viability of the majority of frum families in our communities.

There are no easy answers, but it is our obligation to come together and devise strategies to deal with this in a responsible way.

There has been much discussion recently about leadership. If there is anything that requires leadership, it is ensuring that rov minyan and binyan from those in our communities are not reduced to being shnorrers, because our communal focus is too preoccupied with other less pressing items rather than trying to address the most burning needs of Klal Yisroel. This requires real rabbinic and lay leadership. Slogans won’t do. Innovative ideas will have to be devised if we want to ensure that most of us don’t plunge over the cliff. Otherwise, chas veshalom, we may be reduced to a situation where, in addition to the scores of Yidden from Eretz Yisroel who we see collecting daily in our shuls, many of our own neighbors may join the collection scene.

That would be an unforgivable tragedy, especially because it is one that could and can be avoided with principled leadership.