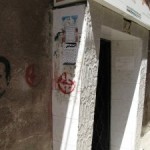 Yarmouk was home to the largest Palestinian refugee community before the conflict began. 180,000 Palestinian civilians called it home. Now only 20,000 remain. Food and medical supplies are routinely denied entry, and starvation is one of the three main causes of death. Recently, in the Jarabulus area, 22 people were killedand thrown into the streets to instill fear in the population. Some of them were children.

Amnesty International has called for the immediate lifting of the siege, the cessation of shelling and other indiscriminate attacks, and for humanitarian agencies to have unfettered access to the area. The disproportional attacks on civilians must end.

Down with Israel? Not quite. Yarmouk and Jarabulus are in Syria.

In fact, many in that country are decrying the lack of attention to their plight, and the fact that images and videos often go viral only when they are falsely presented as being from Gaza. Marc Lynch, the Director of the Institute for Middle East Studies at GWU, put it succinctly when he said, “It must be so awkward having to check whether the dead child is from Gaza or Syria before deciding whether to be morally outraged.”

So to those condemning Israel: Are you pro-Palestinian, or are you really just anti-Israel? Many of you purportedly care so much when you really care so little. As Leon Wieseltier of the New Republic once wrote: It is easier “not to dive deep into the substance of anything. It is less immediately satisfying than cursing and linking.”

My Twitter and Facebook feeds would have me believe that the only noteworthy military conflict in the world today is that between Israel and Hamas. Either many of you care about war only when it involves a Jew holding a gun, or you are woefully unaware of what else is going on in the world. In case it is the latter, and I sincerely hope it is, here is a (very) partial list of the death tolls from other ongoing conflicts. In no particular order:

This is not to say that your attention and sympathies should be dictated by casualty counts. All civilian deaths are tragic. Moreover, such figures tell us nothing about the moral standing of the warring parties, especially not in the case of the asymmetric warfare that Hamas is waging. After all, the United States lost about 450,000 lives fighting in World War II, while the Nazis lost over seven million, yet I would wager that none of you think the Nazis held the moral high ground. At least I hope so. The twisted logic and moral relativism of some of the posts I have been reading make me wonder.

What these figures do show is that while all war contains tragedy, including the one in Gaza and Israel, only deaths connected to Jews seem to evoke the cries we have been hearing over the number of dead in Gaza, which pales in comparison to other conflicts and is largely due to Hamas’ grotesque tactics. While there are few of you whom I would accuse as individuals of holding animosity toward Jews, there are many of you who are participating in a global, collective media assault on Israel that is indeed suggestive of something much darker.

I am not asking you not to care. On the contrary, I am hoping that you all start to care more – about the many problems in the world. Then, perhaps going forward your condemnation of Israel could be – let’s see, how should I put this – more proportional.