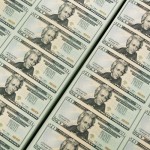 The story is told of a wealthy individual who had many real estate holdings and a very nice portfolio. One day he called up the Gabbai Tzedaka of the city and asked for an appointment. Obviously, the Gabbai became very excited. “Wow”, he thought to himself,” such a wealthy person is calling me for an appointment!” The Gabbai immediately rearranged his schedule and sat down to meet the prospective benefactor. To the Gabbai’s dismay the “wealthy” individual immediately began sobbing and crying like a baby. He told the Gabbai, “Although it appears that I have much wealth, as the Gemora in Bava Kama Daf 7A discusses Batim, sados, u’kramim – houses, fields and vine yards, that I have triple nets, development properties, parking lots, residential and commercial real estate and everything looks wonderful, I am actually here today to ask you for some funds to help get me through the difficult period I am experiencing. I have tremendous debts, the payments are eating me up. I don’t know how much longer I can continue like this. I am having a very hard time. The rental market is down. The economy is looking pretty bad. I don’t know how I’m going to make it. I need some help!”

Asked the Gabbai, the obvious question, “Why don’t you sell off some of your properties and you would have some cash.” To this the property owner responded, “Were I to sell today I would receive pennies on the dollar because of the present real estate market. I need to hold on to these properties and get funds elsewhere to hold me over. I am having great difficulty meeting the monthly mortgage payments. I need your help.”

The dilemma facing the Gabbai was whether he was allowed to use money of Tzedaka to help this individual who had the option of selling off some of his properties albeit at a great loss? On the one hand he is penniless, with any money he has going towards mortgage payments. Should he fail to make the payments he faces foreclosure and the downward spiral of his portfolio. On the other hand perhaps he should sell off one or two properties without having to come on to Tzedaka.

Let us analyze the Gemora in Bava Kama (Daf 7A) to seek guidelines to resolve this question.

The Gemora there relates that there was an individual who owned houses, fields and vineyards. He was unable to find a purchaser for any of his properties. The Halacha is that we feed him maaser oni – thetithe usually earmarked for the poor – “until half”. In order to understand what “half” means we need to mention the machlokes between Rashi and other Rishonim in the sugya as to what type of an individual the Gemora is discussing.Rashi tells us the individual of our Gemora has real estate worth 200 Zuzim. The Mishna in Peah states that someone having 200 Zuzim cannot receive leket, shikcha, peah or maaser oni because he is not considered a poor person eligible for these matnos aniim. According to Rashi the Gemora is telling us that if the individual has 200 Zuzim worth of property which he can’t sell, we still will give him “half” of 200 which is 100 Zuzim ofTzedaka. According to Rashi this Gemora would have no relevance on our case of “the poor millionaire” who may have holdings worth in the millions.

Tosfos in the name of the Rif has a completely different understanding of the sugya which has great relevance to our discussion. According to the Rif, the individual our Gemora discusses is one who is in fact wealthy but due to bad market conditions can’t find a buyer who will give him a good purchase price for any of his properties. The Halacha our Gemora is telling us, according to the Rif, is that he is entitled to matnas ani’im, without selling his holdings, if he can only sell them for up to “half” i.e. 50 cents on the dollar. If he can receive more than 50 cents on the dollar then he is not entitled to Tzedaka. According to the Rif this Gemora is discussing our exact case. Since his holdings are substantial he will not be eligible to Tzedakaand will be required to sell off some of them as long as he receives over 50% percent of their value.

According to the Rif the flow of the Gemora is excellent. In the previous case the Gemora discusses a wealthy individual who was travelling, for whatever reason, without any funds. He is considered a temporary poor person at that time and is entitled to charity from the local Kupah. Our case of “the poor millionaire” follows according to the Rif. Our Gemora makes a determination that not being able to sell property at more than 50% of its value qualifies a person as an oni for matnas aniim purposes. In both cases due to specific circumstances the wealthy individual has no funds available and is considered a poor person eligible to charity from the local community and the Gabbai Tzedaka.

According to the Rif the Gemora now asks what is the exact case? If the entire real estate market has crashed and the value of all properties has dropped sharply, then he should be obligated to sell even when he can only get less than 50% of its former value. Under these circumstances he is not selling it for cheap – rather he is selling it cheaper than last year. He is, however, selling it for its present full value for which he can find purchasers. He is therefore not considered a poor man. He is considered a wealthy man in spite of the fact that his 6 million dollar house now only sells for 2.5 million. According to the girsa of the Rif the Gemora says that in such a case he should not be entitled to any Tzedaka and he should be obligated to sell some of his properties.

On the other hand, continues the Gemora, if the market value is stable and he is the only one whose assets are valued lower than their actual value because people are aware that the seller is in need of money and a rumor has circulated that people can expect a “fire sale” since he is so desperate for cash, then he should be entitled to Tzedaka without selling his holdings even if he can get 90% of the actual market value?He is not obligated to sell at a loss if it is only a personal problem such as one who is panicking due to a lack of funds.

The Gemora concludes that the up to “half value” case is where there is a seasonal downturn in the market value of fields or vineyards. Winter is not the ideal time to purchase such real estate. People wait for a better period during the year for such acquisitions. If our “poor millionaire” were to sell his fields and vineyards during the winter, he would not be able to receive their true market value since it’s a bad time to sell. He is therefore allowed to wait to sell until Nissan when the dead market revives itself and thus allowed to temporarily take from Tzedaka.

Tosfos adds that houses also have their good times and bad times during the year for the selling of houses. The good times are the periods in the year when there are rental turnovers such as during Elul, before Pesach and the Yomim Tovim. It is during the other periods of the year when the Halacha of “half value” is relevant. If the seller can receive more than 50% of the regular value during the good periods of the year then he is not considered a poor person, he cannot collect from Tzedaka and must sell his properties. On the other hand if he can only receive 50% or less of its regular value he is considered an oni, is allowed to collect from Tzedaka and can wait until the better periods of the year to sell his properties.

Now that we have constructed guidelines, based on the Gemora in Bava Kama Daf 7A, let us return to our original case. It is now clear, based on the Rif and Tosfos, that if one cannot sell due to a personal issue, where the market value for his house is lower than that of the general populace, then he is considered an oni who is entitled to Tzedaka. He need not sell his properties at a loss due to a personal issue. On the other hand if the general real estate value of all homes has gone down he is obligated to sell his properties even at a loss of more than 50% since that is the current real value of his holdings. It is even possible that the previous high costs of real estate were inflated due to a hot buyer’s market and now have come down to their actual true value. In any event where his situation is the same as everyone else, he is considered to be a wealthy individual and not entitled toTzedaka. If there is a seasonal drop in real estate value then the person would be allowed to wait to sell if presently he would only receive 50% or less of the regular value and would be entitled to Tzedaka in the interim. He would have to sell if presently he would receive over 50% of what the value is in the better periods of the year and would not be entitled to Tzedaka.

However, what requires clarification is where sales of properties have been frozen due to outside influences such as a freeze in bank loans. Is this considered that the value of everyone’s properties has gone down? That being the case our “poor millionaire” would be considered wealthy and not entitled to Tzedaka. On the other hand we can say that this may be considered seasonal since the financial institutions are certainly bound to ease up on the freeze so that they can begin making loans and generating profits. If this is the case our “poor millionaire” would be subject to the “half value” rule. A sale of more than 50% would make him be considered as wealthy and not eligible to Tzedaka. A potential sale of 50% or less would make him to be considered as an oni and eligible to Tzedaka. This question must be determined in consultation with poskim, dayanim, real estate and banking experts who would give their expert assessment of that specific real estate market.