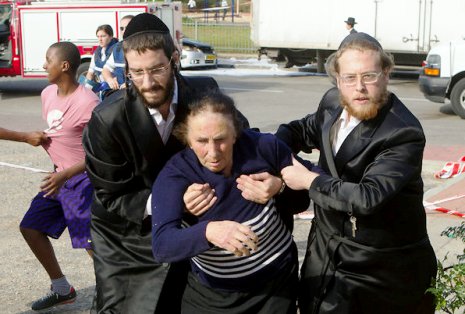 The anti-chareidi media, in Israel and abroad, are always engaged in their warfare against the religious community, as they try to portray frum Jews as close-minded misogynists. So don’t expect to see them publish this photo of two chareidim holding an elderly woman, assisting her as they head for a bomb shelter as a ‘Red Alert’ sounds in the southern town of Ashdod yesterday.

A short while earlier a Grad missile fired by Palestinian terrorists inside the Gaza Strip landed in the road behind them, burning a car and shattering many windows of nearby apartments. Several Israelis were lightly wounded in this attack that the Iron Dome missile interceptor system failed to shoot down.