Nancy Pelosi is protecting Rep. Charles Rangel, who failed to pay taxes on his Caribbean villa, among other miscues. But the ethically challenged congressional baron is endangering the Democrats’ control of Congress.

Today’s Democrats should remember Dan Rostenkowski. The former Democratic Chicago congressman was the kind of guy who would have made an all-Madden team for pols. Growing up, his home doubled as a meeting house for precinct captains. He attended Catholic schools, fought in Korea, then became a made man in the Richard Daley machine. Dispatched to Washington, he learned the inside game from masters like Lyndon Johnson and Tip O’Neill, and by the 1980s had become chairman of the House Ways and Means Committee. Parochial, crusty, inarticulate, and tough, he sat for decades atop Washington’s pyramid of power-until the Gingrich Republicans made him a symbol of Washington’s decadence. Skewered for keeping “ghost” employees on his payroll, using government money to buy presents for friends, and abusing privileges at the House bank, he lost his seat in the 1994 Republican landslide. “The Rules Kept Changing,” observed Chicago Tribune columnist Mike Royko, “Dan Rostenkowski Didn’t.”

Charles Rangel would make the all-Madden team, too. The son of a maid, he went to work at age 8, won a Purple Heart in Korea, and rose through the Harlem Democratic machine. Since entering Congress, he has spoken blunt truths: declaring that if congressmen’s sons served in uniform, America would never have gone to war in Iraq. He has taken care of the little guy, assiduously bringing home federal bucks to his impoverished district. And in the Rostenkowski tradition, Rangel has taken care of himself as well, using rent-controlled apartments given to him by a Manhattan developer,and failing to pay income tax on a three-bedroom villa in the Dominican Republic (where he’s been pictured napping). 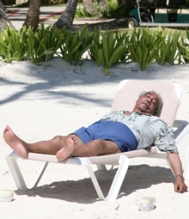 A Democratic source says party pollsters are picking up rumblings that the Rangel scandal is starting to register with the public.

There’s nothing Barack Obama and Nancy Pelosi can do about the first problem. The stimulus, the bank bailouts, the auto-takeover and the health-care push have convinced large numbers of aging white people that Obama is Mao Zedong, and they’re not going to change their mind anytime soon. The best response to the second problem is to pass health-care reform and give Keith Olbermann something to get excited about. But perhaps most crucial of all is responding to problem No. 3.

Independents are the most fickle, the most cynical, and the least ideological people in the American electorate. When they’re unhappy with the state of the country, they tend to stampede the party in power-less because they disagree on the issues than because they decide that the folks running government must be malevolent and corrupt. In Washington, congressmen violate ethics rules all the time. But when independents get in one of their sour moods, these infractions become matches on dry tinder. In 1994, the scandals concerning Rostenkowski and the House bank helped sweep the Gingrichites into power. In 2006, according to exit polls, the scandals surrounding mega-lobbyist Jack Abramoff and Rep. Mark Foley did more to lose the GOP control of Congress than did the Iraq war. Pelosi became speaker, in fact, by running against the GOP’s “culture of corruption” and promising the “most ethical Congress in history.”

Now Republicans are hurling those phrases in her face. Democrats, who in April 2006 held a 17-point advantage as the party less “influenced by lobbyists and special interests,” have seen that margin dwindle to eight points, according to the Pew Research Center. The National Republican Congressional Campaign Committee has begun running ads against Democrats who accepted donations from Rangel, and two of the party’s most vulnerable congressmen, Alabama’s Bobby Bright and New Hampshire’s Paul Hodes, have called for Rangel to step down as chairman. Call them the canaries in the coal mine.

Since Pelosi won’t nudge Rangel, it’s time for Obama to nudge Pelosi. After all the abuse the White House has taken for not televising the health-care deliberations, surely it has learned that for independents in particular, symbols of government openness and honesty really matter. Obama doesn’t owe Rangel anything: The Harlem congressman not only endorsed Hillary Clinton during the 2008 campaign, he reminded voters of Obama’s youthful drug use. And with an African-American in the White House, Rangel’s supporters will find it hard to claim he’s a victim of racism. A year ago, when Rangel was guiding health-care legislation through his Ways and Means Committee, replacing him might have been costly. But now the action has moved to the House and Senate floor.

A Democratic source says party pollsters are picking up rumblings that the Rangel scandal is starting to register with the public. If Pelosi and the White House wait until the ethics committee hands down its final verdict, it may be too late.

Is Rangel’s behavior so egregious that sheer decency requires that he be forced from his chairmanship, if not from Congress altogether? Not really. His infractions are petty compared to the vast, legalized corruption that marks our campaign finance system. But neither is Rangel worth jeopardizing the Democrats’ congressional majority for. What Mike Royko said about Dan Rostenkowski is now true for the Washington Democratic Party writ large. With unemployment at almost 10 percent, and the public eager for someone to blame, the rules have changed. To survive, Democrats must too.