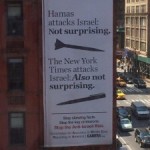 If the Op-Ed in yesterday’s The New York Times is correct (“How Israel Silences Dissent”), Israel is not the one “free state” in the Middle East, a designation it received from Freedom House.

Rather, it is descending into the surrounding undemocratic Middle Eastern abyss. The Jewish state, one would conclude from The Times opinion piece, joins the likes of Egypt, where over 1,000 demonstrators were killed this year, and Libya, which saw the killing of 43 demonstrators last November in Tripoli.

“The aggressive silencing of anyone who voices disapproval of Israeli policies or expresses empathy with Palestinians is the latest manifestation of an us-versus-them mentality that has been simmering for decades,” laments Mairav Zonszein in her Times Op-Ed.

Zonszein’s hysterical polemic about new heights of “radical nationalism” and “erosion of Enlightenment values” (language which she attributes to Israeli political scientist Zeev Sternhell) suggest the mass killing of demonstrators like in Egypt or Libya, the widespread arrest of journalists like in Turkey, and the total crushing of dissent as in Syria.

Surely, then, in light of “the aggressive silencing of anyone who voices disapproval of Israeli policies,” the influential liberal Haaretz, whose publisher has defined the paper’s mission as “actively supporting the two-state solution and the right to Palestinian self-determination,” and whose editorials not infrequently accuse Israel of deeply entrenched, widespread racism, apartheid and war crimes, has been shuttered.

But, no, a visit to the lively Haaretz Web site reveals that it has miraculously evaded the otherwise unrelenting forces clamping down on any poor soul who dares to challenge “the narrative that Palestinians are enemies who threaten Jewish sovereignty and are solely to blame for the failure to achieve peace,” as Zonszein puts it.

Moreover, The International New York Times, where Zonszein’s Op-Ed appeared today in print, has a partnership with Haaretz and the two newspapers are distributed together in Israel. Today, like every other day, Haaretz appeared in print bundled together with The Times.

Zonszein should know. She is, after all, an editor at Haaretz, though The Times identifies her only as “an Israeli-American writer, translator and editor” who blogs at +972 Magazine.

So, then, has Haaretz caved to the all-powerful Israeli regime which tolerates no dissent? Hardly. Today’s editorial takes the Israeli government to task for its harsh criticism of Palestinian President Mahmoud Abbas’ UN General Assembly speech in which he accused Israel of genocide, among other things. “[L]eaning on Abbas’ speech reflects nothing but fear and weak leadership,” ventures the Haaretz editorial writer. As of press time, there have been no reports of police raids on Haaretz headquarters.

What about +972 Magazine, Zonszein’s other affiliation? Surely the oppressive regime could not be so incompetent so as to also turn a blind eye to the blog-based Web magazine dedicated to the freedom of information and whose mission is “to oppose the occupation.” In fact, it too is alive and well, with subversive headlines like “Letter to the EU: Everybody hear has lost their minds,” “Watch out war criminals, Abbas is coming for you,” and “Another act of Israeli military madness in Syria.” (No, this is not satire.)

If the “aggressive silencing of anyone who voices disapproval of Israeli policies” does not actually affect the media, surely it must be silencing the cacophony of NGOs operating in Israel? In fact, the High Court last week ruled in a favor of a petition submitted by the Association for Civil Rights in Israel (where Zonszein once worked), the Hotline for Refugees and Migrants – Assaf, and Physicians for Human Rights-Israel, among other NGOs, to shut down an “open” detention facility for asylum seekers. If the regime seeks to “silence” these NGOs, it sure has a funny way of showing it.

Maybe the “silencing” translates into widespread dismissals and arrests in the university? What of the embattled Zeev Sternhell, professor emeritus of Hebrew University, who in the height of this summer’s fighting gave a lengthy interview to Haaretz (over 3,000 words) about Israel’s eroding democracy? The silencers haven’t yet removed his interview, and Hebrew University hasn’t touched his Web page.

Zonszein, in her zeal to depict an Israel which “silences dissent,” notes in her Op-Ed that “Mr. Sternhell has experienced Jewish extremist violence firsthand; in 2008, a settler planted a bomb in his home that wounded him.” She omits, though, that the settler, Yaakov Teitel, was sentenced to two life terms for his crimes, including the killing of two Palestinians.

Zonszein also pointedly ignores the fact that Teitel planted the bomb outside Sternhell’s home months after the State of Israel granted him the coveted Israel Prize in 2008.

Herein lies the crux of Zonszein’s grotesquely distorted depiction of the state of democracy in Israel. She focuses on the extremist’s attack on Sternhell, ignoring the fact that the state itself honored the professor with a prestigious award.

She focuses on the violence and extremism of a few, conflating it with “Israel” silencing dissent.

As freedom and democracy continue to decline in much of the Middle East with the notable exception of Israel, The New York Times’ disproportionate, obsessive criticism of Israel drives the paper’s coverage into a journalistic tailspin.