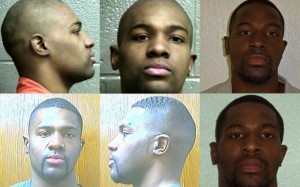 Alton Nolen decapitated his co-worker and tried to kill another on Friday. How did he go from cocaine felon who triggered a 2010 manhunt to an amateurish obsession with jihad and ISIS?

The annals of American violence include countless workplace shootings.

We now have a workplace beheading.

The workplace in question being the Oklahoma food-processing plant where 30-year-old Alton Nolen labored until he was fired on Friday morning.

Nolen proceeded directly from human resources to the front office. He barged inside with one tattoo of Jesus Christ across his chest, another of a praying hands on his right arm, then two more bearing the name of deceased friends on his left.

There was also a newer one on his abdomen-a traditional Arabic greeting that marked his conversion to Islam and his recent efforts to persuade his fellow employees to do the same.

“AS-SALAAMU ALAIKUM,” this one read, translating to, “Peace be unto you.”

Nolen is said to have still had the knife he used to cut up produce and he allegedly employed it to behead a 54-year-old woman he had never met named Colleen Hufford. The result was much like in a photo of a beheading he had posted on his Facebook page in March.

“This do we find the clear precedent that explains the particular penchant of Islamic terrorists to behead their victims, it is merely another precedent bestowed by their Prophet,” reads the caption, which adds a citation from the Quran, “I will instill terror into the hearts of the Unbelievers; smite ye about their necks.”

With this heinous act, Nolen may have been seeking to convince himself, if nobody else, that he was not just an ex-con who was once again out of work. He could imagine himself an Islamist avenger like that masked monster in black who appears in the ISIS snuff videos.

In his frenzy, Nolen reportedly sought to decapitate a second woman and only stopped when he was shot by the chief operating officer of Vaughan Foods, who is also a reserve cop.

Nolen does not, on first inspection, seem to have direct links to a terrorist organization. Any connection to ISIS is apparently psychic, fantasy made real with the blood of an innocent.
Nolen survived his wounds. The FBI joined the investigation and no doubt took interest in the Facebook page he keeps under the name Jah’Keem Yisrael. The page has a picture of armed jihadis as the cover picture and numerous shots of other Islamist fighters, including black-clad women with automatic weapons.