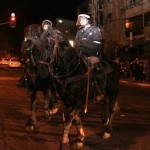 I was dismayed when I read reports and saw pictures on Matzav of the protests in Israel this week. Let me be clear on one thing: I definitely do not support throwing yeshiva bochurim in jail for avoiding the army! Yet I believe the protests yesterday will end up doing more harm than good in this regard.

As frum Jews, I’m sure we all believe that people learning Torah is just as important to the safety of our homeland as the army is. Yet we must bear in mind that a huge part of the Israeli population is not made up of frum Jews, and they don’t see things the same way. We must try to bridge the gaps and come to some mutual respect. I know this is very difficult, as there are opinions already ingrained on both sides. Having protests and demonstrations is fine – when done properly.

Let’s look at the Atzeres Tefillah which took place recently. Hundreds of thousands of frum Jews attended. There was no violence whatsoever. It was a huge Kiddush Hashem. Now let’s contrast it with yesterday’s protest. There were people screaming abusive comments at police. Dumpsters were set on fire. Is this how we want people to look at frum Jews? Imagine how a chiloni sees this. Do you think they say, “Wow, look how the chareidim support this person. It must be very important to them!” I highly doubt it. Instead, the reaction is likely, “Ok, here we go again. Lighting fires, throwing things at police… these chareidim are terrible!” The entire message of the demonstration is lost because the focus is on the violence.

We know that deracheha darchei noam – the ways of the Torah are pleasant. Would you say that yesterday’s protest was showing that? When chilonim see the people who supposedly represent Torah acting like that, do you think it brings them closer to the Torah? Or does it just further the divide between us?

Instead of violence, let’s try to bridge the gap. I’ve heard from numerous Rabbonim that while they oppose the government, they have nothing against the soldiers, and are actually very thankful for what the soldiers do. Why not have a campaign to show that? R’ Shlomo Zalman Auerbach zt”l was known to go daven on Mt. Herzel because he held the kevarim of the soldiers were kivrei tzaddikim! Try having an adopt-a-soldier program, where yeshiva bochurim would each adopt a soldier that the merit of their learning would protect. While the soldiers might not think it actually does anything, I believe they’d still be appreciative of the gesture. How many chareidi yeshivos/shuls say a mi shebeirach for the soldiers on Shabbos? Why not start saying it? It says nothing about the government in it. It’s a tefillah for Hashem to protect the soldiers.

If the chareidim show their support for the soldiers of the IDF, it would go a long way to bridging the gap between the two sides. Definitely a lot more than lighting dumpsters on fire.