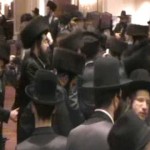 Thank you for providing this useful and interesting forum for the frum community.

Some may scoff at the issue I would like to raise, but here it is.

In a beautiful display of kavod haTorah, by most chasunas, when a respected rov or rosh yeshiva enters the circle of dancing, the popular song “Yomim a yemei melech tosif” is played, and the spirited singing and dancing displays the reverence with which we hold our rabbonim and roshei yeshiva.

The idea is a most beautiful one, no doubt.

However, at many chasunas that I’ve attended, the dancing has been interrupted 4-5 times so that Yomim can be played. The entire momentum of the second dance, which is customarily comprised of hora songs, comes to a complete halt when Yomim is played for what might be the fifth time that night.

When something is done too often, it not only becomes a nuisance, but it also loses its chashivus.

Am I the only one who feels this way, or are there others who feel the same?