Rabbi Avi Bookman is a combination of many things that you don’t see every day. A Choshen Mishpat expert and expatriate of Scotland as well as a sharply descriptive writer, connoisseur of fine whisky, and person experienced in hydraulic engineering and cosmetics; Rabbi Bookman’s broad perspective and particular fascination with halacha led him to write the book The Lost Scotch, a solve-it-yourself book of Choshen Mishpat-related stories. The Lost Scotch, which was originally printed in the small numbers common to a Halacha book, had to be quickly reprinted because of its surprising success.

The Lost Scotch II, as its name suggests, is a sequel to the well received original. While the seventeen stories contained in this volume are stand-alone tales, numerous veiled references to characters from the first book such as the inimitable singer Chaim ben Zundel, as well as the Scotch that was Lost, make this book doubly enjoyable to fans. Rabbi Bookman writes with an artistic pen, crafting together curious characters with puzzling scenarios, building up to a monetary dispute; the Halachic resolution to each is laid out, with sources, in the back of the book.

The stories, which involve tension over objects so varied as a custom drum set with double bass pedals, an overpriced esrog, or a multi-million dollar life insurance settlement, are written craftily. The eclectic and true-to-life characters provide just enough clues to make you think you know the answer, and then a few teasers to make you tear out your hair. By the time the end of the story comes, you’ll be eager to turn to the back and get the real Halacha. 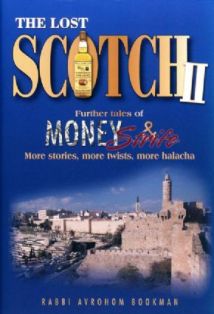 As with any quality scotch, this book is mature, has great depth of character and is extremely versatile. Like the first Lost Scotch, it is as compelling served as a Shabbos Table conversation piece, as it is in a Beis Hamedrash with a Shulchan Aruch and Igros Moshe. The Lost Scotch is perfect straight up, without ice, and its taste will linger delicately on your tongue long after you have finished it.

The Lost Scotch II, as well as the first volume, are available in Judaica Stores everywhere, or from Israel Book Shop Publications (732) 901 3009.

To order the book online for a discounted price of $20.66, click here.