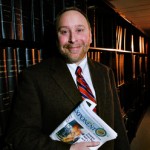 Last year, a study on the American Jewish population published by the Pew Research Center made it plain that non-Orthodox Jewry in this country was in crisis. The devastating statistics about rising rates of intermarriage, assimilation and declining rates of affiliation painted a Portrait of Jewish Americans that left little doubt that liberal Jewry was in crisis. Since then, many in the Reform and Conservatives denominations, especially their leaders, seem to be in denial about the seriousness of the problem, but a story in Friday’s New York Times illustrates their dilemma nicely.

The article concerns the decision of Rabbi Andrew Bachman of Congregation Beth Elohim in Brooklyn to leave the rabbinate and pursue a new career in poverty work. On the surface, there’s nothing particularly significant about this. Rabbis, like lots of other professionals, often change their professions in mid life. As the rabbi says, the shift is neither a crisis of faith nor a contradiction of his life’s work as there is no inherent contradiction between being a Reform rabbi and being a poverty activist.

But the Times was not wrong to highlight this story as being something of a metaphor for liberal Jewry. Bachmann was widely seen as being among the best and the brightest in the Reform rabbinate and a man who had transformed his synagogue into a vibrant center attracting congregants eager to be a part of his vision of social activism. His decision to leave doesn’t mean that Beth Elohim will collapse. But it does show that when you start treating Judaism as merely a vehicle for liberal social activism, it’s difficult to resist the impulse to eliminate the middleman. Bachmann may not be renouncing his faith or even his calling as a rabbi but, as we learn in the Times account of his decision making process that he has discovered that he’s a lot more interested in spending his life advancing the anti-poverty agenda than in teaching Judaism to a generation of Jews who are desperately in need of leaders able to reach them.

One needs to be careful about going too far with this line of reasoning, but, it’s difficult to criticize the Times for assuming that there is a connection between the rapid decline in affiliation and synagogue attendance and the way many non-Orthodox Jews believe their faith is synonymous with liberal activism rather than a civilization and a people that transcends the particular political fashion of our own time.

Those who wrote about the Pew Survey rightly focused on statistics that showed the overwhelming majority of non-Orthodox Jews are intermarrying and the secondary results that show that the children of such marriages are exponentially less likely to be Jewishly educated, affiliate with the Jewish community or regard themselves as “Jews by religion.” Those numbers point in only one direction and it is one that means that within a few generations most of the descendants of those who currently call themselves Conservative, Reform or Reconstructionist Jews will have left the Jewish community and have only the most meager and vestigial ties to their origins.

But just as telling as the intermarriage numbers were those that explored what it means to be a Jew to those who still do consider themselves Jewish. Relatively few see it as having anything to do with religious faith or being part of the Jewish people. More think it is a function of having a sense of humor than being connected to the State of Israel. When asked what defines Judaism and Jewish identity, most eschew all those elements that are the defining characteristics of Judaism and, instead, focus on those that apply equally to all faiths, such as a desire to promote social justice.

Jewish identity and faith has always contained within it a lively mix of the universal and the particular. But in the universe of liberal American Jewry, the balance is skewed toward the former. As Cynthia Ozick memorably said, “universalism is the particularism of the Jews.”

As such, liberal Jews are far less likely to resist the blandishments of assimilation since there is very little difference between their view of their faith and the secular political version of liberalism. However, as many in these denominations have discovered, it is a lot easier to devote yourself to a liberal cause without tugging along your Jewish baggage. In a movement that treats anti-poverty work as synonymous with faith, who can blame Rabbi Bachmann for deciding to stop trying to feed the hungry in a Jewish context and instead just cut straight to the chase?

As I wrote in the November 2013 issue of COMMENTARY, this exodus of non-Orthodox Jews is largely the function of free society in which Americans have a choice as to whether they will retain their faith and the breakdown in barriers between faiths that has caused non-Jews to be willing to marry Jews. But it is exacerbated by a societal trend in which the overwhelming majority of American Jews have lost all sense of what it means to hold onto a viable Jewish identity that can be handed down to subsequent generations. If you believe, as most do, that Judaism can be summed up in the phrase “tikkun olam” – a concept about repairing the world that has become a tired cliché andbeen stripped of its particular Jewish meaning or, as the old quip goes, the Democratic Party platform with holidays thrown in, why be a Jew at all?

The answer from all too many liberal Jews is that there is no real reason to stick with Judaism and the result are the numbers that the Pew Center published. Sadly, both the leaders of the Conservative movement and Bachmann’s Reform movement, have taken a blasé attitude toward the Pew statistics, claiming that their impact is either being exaggerated or misinterpreted rather than raising an alarm. That sort of complacence is on display in the quotes in the Times article from both Bachmann and Reform leader Rabbi Rick Jacobs. They urge Jews not to “build a wall around their Judaism in an effort to preserve it. But it’s difficult to view the catastrophic numbers in a context other than one in which the consequences of not preserving distinctions or viewing Judaism as religious liberalism are becoming apparent. As scholars Jack Wertheimer, Steven Cohen and Steven Bayme have pointed out, the only way to preserve non-Orthodox Jewry is to emphasize both Jewish particularity as well as seek to promote endogamy.

Rabbi Bachmann isn’t leaving Judaism but that is exactly what most non-Orthodox Jews are doing. If even he sees a life devoted to Jewish teachings as somehow not fulfilling enough to suit his needs, how can anyone else argue that it is reasonable to expect his congregants not to shuck off Jewish particularism just as easily?