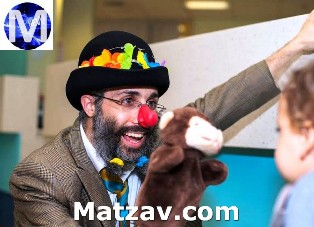 The 33-year-old father, who lives in Karnei Shomron in northwestern Samaria, dons his bullet-proof vest and carries his M16 to protect his community in an event of a terrorist attack, as a volunteer in his neighborhood security watch team. But Singer’s other uniform – a far jollier one – consists of a red rubber nose, clown shoes, and a colorful tie and crazy hat that he wears during clown therapy sessions at a Tel Aviv hospital.

The religious settler travels once a week to the Tel Aviv Sourasky Medical Center (Ichilov Hospital), where he works to uplift patients, through jokes, laughter and improvisation.

“A hospital is not a fun place,” Singer tells Tazpit News Agency. You want the patients to feel more comfortable.

“I’ve worked with children and parents who are hysterical before blood infusions, check-ups, or surgery. My job is to relax the parents and help the child overcome the pain and tension. That helps the staff and doctors too. Once you give the parent and child a chance to smile and breathe more easily, it helps everyone,” Singer told Tazpit News Agency in an exclusive interview.
Singer, who has been volunteering as clown therapist for three years, has worked with many different sectors of Israeli society including Palestinian children from Gaza who have been brought into Israel for treatment. “You don’t look at the person before you – I don’t see an Arab, Eritrean, Russian, or whatever ethnicity person is – all I see is the pain.”

“To me, it doesn’t matter if it’s an Arab child or a Jewish child – I want to help bring that person out of the pain and give him or her some positive energy,” Singer explains.

“Sometimes, I throw in a word in Russian or Arabic during a joke and the smile in return is worth everything.”

Singer has found himself in situations where rocks have been thrown at his vehicle on his way home to Samaria from the hospital. “Palestinians throwing rocks at my vehicle won’t stop me,” he says. “I believe that when Arab patients see me, it will give them a chance to see that a religious settler is not a monster and maybe in turn it will make them stop throwing rocks.”

Singer’s day job is aerial photography but he says that it’s his volunteer work that is most meaningful. “I volunteer in two very different professions, but both save lives in different ways.”

He describes a unique Purim two years ago in Karnei Shomron when he dressed up in the clown costume he usually donned for clown therapy session. Suddenly in the middle of the Purim seuda (festive holiday meal) the community was alerted to a potential terror threat.

“Here I was, dressed as a clown with a red rubber nose, and I had to go out with my M16 for a security check,” he says. “That was truly a bizarre experience.”

Today an estimated number of 320 clown therapists operate across Israel. Following a chance meeting with a clown therapist who treated Singer’s daughter when she was hospitalized five years ago, Singer decided to take a six-month clown therapy course where he learned how to be a medical clown himself.

“I go to the hospital every week and act as a clown to make someone feel better. I want to change a child’s reality for good and this is how I do it.”