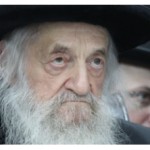 In the video recently released of the Chofetz Chaim at The First Knessia Gedolah on August 15, 1923, one of the rabbonim who were supporting the great tzaddik was Rav Teitelbaum, who was very close to the Gadol Hador.

At 25 years old, Rav Teitelbaum was the rosh yeshiva of a yeshiva in his town that had over 800 students. The head of the town was very wealthy, as well powerful and influential. He announced that he was going to send his oldest son to the gymnasium (university). The news was shattering, as he was setting an example for joining ranks with the Haskalah movement, which were wicked people who were against Hashem and the Torah. Even though he tried, there was nothing Rav Teitelbaum could do about it.

Rav Teitlebaum set up the appointment, but did not tell the Chofetz Chaim about this man’s decision for his son. When the wealthy man was brought in to see the holy Chofetz Chaim, he asked for a bracha. The Chofetz Chaim looked at the man and said, “Who is Yisroel Meir to give you a bracha? If your son goes to yeshiva, he will have all of the brachos of the Torah. And who is Yisroel Meir to stop the curses of the Torah if your son does not go to yeshiva.”

The man was astounded and terrified at hearing the strong words of the Chofetz Chaim. Of course, he followed the words of the gadol hador and sent his son to yeshiva.

This son grew up and become Rav Shmuel Halevi Wosner, author of Shevet Halevi, the av bais din of Zichron Meir of Bnei Brak, rosh yeshiva of Chachmei Lublin and a posek hador.