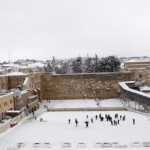 There is a well known statement of Chazal that “Vitar Hashem Al Avoda Zara, V’Al Gelui Araiyos, V’Al Shefechus Damim, V’Lo Vitar Al Avon Bittul Torah” – “G-d will be lenient with (the very most terrible crimes of) idolatry, immoral corruption, and murder, but HE will not be lenient with the sin of failure to study Torah.

L’Aniyus Da’ati, especially from my painful experience, there is a similar concept: “Vitar Hashem Al Avoda Zara, V’Al Gelui Araiyos, V’Al Shefechus Damim, V’Afilu Al Avon Bittul Torah, V’Lo Vitar Al Sheaino Misabel Al Yerushalaiyim” – “G-d will be lenient with (the very most terrible crimes of) idolatry, immoral corruption, murder, and even [to some degree (as I am obviously not, Chas V’Shalom, contradicting the statement of Chazal)] with the sin of failure to study Torah, but HE will not be lenient with the failure to properly mourn for the destruction of Jerusalem.”

To explain the reason for this, I will first relate an awesome insight that I heard stated by Rav Avigdor Miller, ZT’L. He remarked that there can be two people. The first one is totally irreligious, who does almost no observance of Judaism at all. One day, when it is one of the days of a Yom Tov, he is walking on a street where there is a Torah oriented Shul. As he gets near the Shul, he sees that a full Yom Tov service is being held there, and that the men and women going in and out are dressed up in their best clothes.

For a few moments, he stands there and watches; he is surprised, for he did not even know that the day was a Jewish holiday. Of course, he would not walk in, for he is not part of that congregation, and he is not dressed for the occasion.

By sharp contrast, the second person is extremely religious, who strictly adheres to all of the Halachos and Chumros and has long Sedorim each day to study much Torah. Of course, for school, he sends his children to a Yeshiva; however, in searching for an appropriate Yeshiva for his children, he chooses one that he feels is a little bit more “modern.”

In other words, a person can be involved in all kinds of bad corruptions, but if he realizes that his life is not what is right, then there is hope for him that eventually he will change and become better; to use Rav Avigdor Miller’s words: “He is on the way in!” However, if, Chas V’Shalom, he does not realize that his life is not all right, in other words, he thinks that what he is doing is all good, then, very tragically, hope for him is all gone, for now that he thinks everything is OK, he is never going to become better. That is obviously a terrible state in which he is set for ultimate ruination.

The epitome of realization that our lives are not right is our Aveilus on Yerushalaiyim – our mourning over the destruction of Jerusalem. The very act of being Misabel on Yerushalaiyim is an expression of the fact that our lives are NOT all right, that we keenly realize that without the Beis HaMikdash, we are missing an extremely major part of Torah, and that in this state of Galus, our whole lives, and really the lives of all of humanity, are saturated with terrible difficulties and severe calamities. So we realize that things need to be better, and we thus try as much as we can to make them better.

Conversely, when a person is not Misabel on Yerushalaiyim, that shows that he thinks that everything IS all right; in his mind, the whole world, the exact way it is now, is at its height of perfection — it is Utopia! So, of course, he is not going to try to improve anything, for in his mind, nothing needs to be improved. That he can be thus satisfied with and approve of all of the problems and corruptions and wickedness that now exist in the world, is, understandably, an unforgivable crime.

L’Aniyus Da’ati, this principle is sharply expressed by the Meshech Chochma, in Parshas Bichukosai, page 520. There, he relates how Jewish people defect from the ways of our Torah and turn to follow instead the ways of other nations and cultures. In the middle of this narration, he remarks about their attitude: “Yachshov Kee Berlin, Hee Yerushalaiyim” – “They will think that Berlin, it is Jerusalem.”

Furthermore, in my translation of the statement as: “They will think that Berlin is Jerusalem” I did not translate every word. The Lashon HaKodesh for that incomplete translation would have been: “Yachshov Kee Berlin Yerushalaiyim.” However, the statement of the Meshech Chochma has one more word in it as it reads: “Yachshov Kee Berlin, Hee Yerushalaiyim.” The full translation of all of the words of that line is: “They will think that Berlin, IT is Jerusalem.”

Now the sentence formed by the earlier incomplete translation: “They will think that Berlin is Jerusalem,” would have already been a clearly understandable statement. So when the Meshech Chochma in his formation of the statement puts in this additional word of “Hee” – of “It,” and thus words the statement as: “They will think that Berlin, IT is Jerusalem,” he is clearly trying to double highlight the city of Berlin and hold it up and point to it and declare that (in the mind of the Jews who are defecting) “It IS Jerusalem!”

So what is this heaving highlighting of Berlin and declaring that it is Jerusalem?

The Meshech Chochma is referring to the phenomenon that very tragically occurred among many Jews during the last two centuries.

Starting in the late 1700’s with the French Revolution, there were major political upheavals in several nations of Europe. The political and social changes involved moves away from monarchy dictatorships to the beginnings of democratic governments and the granting of equal rights to all citizens. So the numerous Jewish residents of these countries, whom hitherto had been tightly confined to cramped ghettoes and cruelly abused as third class stepchildren, were now declared full citizens and granted full rights and access to the country’s national life.

In response to these developments, many Jews very tragically made the severely grave mistake of thinking that as these nations were now being so good to them, all of the hopes and yearnings that Klall Yisroel has had to be returned to our Holy Land of Eretz Yisroel and Yerushalaiyim, were now no longer relevant. Now, Germany was to be the new Land of Israel and Berlin the new Jerusalem. (See: https://www.jewishvirtuallibrary.org/jsource/Judaism/The_Origins_of_Reform_Judaism.html

In implementation of these false beliefs, they made their own new prayer books wherein they completely removed all of the prayers asking G-D for our return to Eretz Yisroel and the rebuilding of Yerushalaiyim and the restoration of the Beis HaMikdash and its service of the Korbonos. Some of their congregations even made joyous party celebrations on Tisha B’Av, as they thus openly declared that, now, there was no longer any need for Klall Yisroel to be in any Aveilus!

What they did then was literally the problem we have discussed. As they declared that now there was no need for Klall Yisroel to be in Aveilus, they were declaring that (in their minds) the new situation now was Utopia, everything now was perfect. The way Berlin now was, THAT was Jerusalem! They were thus in effect shutting themselves off from ever repenting.

Thus, in the next paragraph, the Meshech Chochma relates the powerful punishment of destruction that Hashem will bring, which so extremely tragically did happen in the horrific Holocaust bloodbath of the Churban Europa – the Destruction of European Jewry — coming straight from Berlin.

[We must note that most of these Jews did move sharply away from their original radical anti-Eretz Yisroel stance. As early as 1917, they began supporting Zionist operations, and in their platform of 1937, they stated the obligation of building a Jewish Homeland in Eretz Yisroel. (Again, see the above mentioned web page.) Their newer prayer books do have significantly more references to Eretz Yisroel, and they do make observance of Tisha B’Av. Yes, they do realize that we are not yet at Utopia. However, the object of their Aveilus is mostly for the numerous “other” calamities of Jewish history and that there is still suffering in the world. Very, very, tragically, they still have a rabid rejection — even a hatred — of the Beis HaMikdash and its service of the Korbonos. May they all do T’Shuva Sheleima B’Karov!]

The Halachos for these periods of the three weeks and the nine and a half days instruct us to avoid two types of activities: 1.) Things that would negate the sad feelings of mourning that we especially now need to have 2.) Things that entail a risk of danger.

These two instructions of avoidance seem to be completely distinct unrelated rules. Upon deeper reflection though, we can realize that they are really two aspects of the same one concept. As we explained above, our Aveilus – our mourning IS our realization that the world — now with a destroyed Beis HaMikdash and thus in the state of Golus — is full of countless terrible problems and grave dangers. So when, during this period, we refrain from doing many perfectly normal good activities because of extra worry and fear of possible danger, that is an integral part of our Aveilus over the serious problems and dangers of the world!

Conversely, if (during this period) a person does not refrain from higher risk activities, that shows that he is not being Misavel – he is not mourning, for that shows that he thinks that there are no dangers. Yes, he thinks that there are no dangers, for in his mind the world is all safe and perfect. With such a greatly wrong attitude, he is now deserving of, Chas V’Shalom, being hit with those dangers he is so callously ignoring.

May we Zoche to be Roeh the Nechemas Tziyon U’Binyan Yerushalaiyim Bimhara B’iyamaynu – May we be worthy to see the consolation of Zion and the true rebuilding of Jerusalem very soon in our time. Omein.