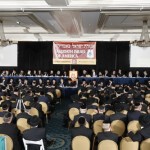 Building on the resounding success of previous years and other venues, this year’s convention will be held in the beautiful and newly renovated Crowne Plaza Hotel in Stamford, CT, November 12-15, Parshas Toldos. The convention will feature its trademark blend of camaraderie, inspiration and chizuk.

A highlight of the convention will be the presence of the Sadigura Rebbe of Bnei Brak, member of the Moetzes Gedolei HaTorah of Eretz Yisroel, as well as members of the Moetzes Gedolei HaTorah of the United States. The convention will also be enhanced by the presence of Dayan Yonoson Abraham, Dayan of the London Bais Din.
The convention will consist of a fascinating blend of interactive breakout sessions and major keynote sessions which will enable each participant to customize their ‘own’ program.
The Thursday keynote program will feature greeting from the Moetzes Gedolei HaTorah, Rabbi Shmuel Kamenetsky, Rosh HaYeshiva, Yeshiva Gedolah of Philadelphia; an address by Rabbi Elya Brudny, Rosh HaYehiva, Mir Yeshiva; Dayan Yonoson Abraham of London and Rabbi Ephraim Eliyahu Shapiro, Rav of Shaaray Tefilah, North Miami Beach, Florida, will address the convention theme.
The Motzoei Shabbos program will be addressed by the Sadigura Rebbe; the Novominsker Rebbe, Rabbi Yaakov Perlow, Rosh Agudas Yisroel (via video from Eretz Yisroel); Rabbi Uren Reich, Rosh HaYeshiva, Woodlake Village; and Rabbi Chaim Dovid Zwiebel, Executive Vice President, Agudath Israel of America.
The convention will conclude with a Sunday keynote session dealing with the poignant topic OTD: Why Are They Leaving, What Can We Do About It, addressed by Rabbi Moshe Tuvia Lieff, Rav, Agudas Yisroel Bais Binyomin; Rabbi Mordechai Becher, Senior Lecturer Gateways; Rabbi Dr. Yitzchok Lob, licensed psychologist.
The complete program is available at http://www.yourconvention.org/program/.
The theme of this year’s convention is Igniting the Leader Within: Yourself, Your Family, Your Community. The convention organizers are promising a fascinating and exciting program with numerous, interactive breakout sessions which will enable everyone to get involved.
In addition to the program there will be a large exhibit area, including an historic exhibit commemorating the life of Moreinu Yaakov Rosenheim and the first half century of Agudas Yisroel, produced by the Kleinman Holocaust Education Center (KHEC).
A limited number of rooms are still available. For further information or to register, please call 212-797-7380 or email convention@agudathisrael.org.
{Matzav.com Newscenter}