Chaim Weizmann called it “a death sentence for the Jewish people.” David Ben-Gurion said it was “the greatest betrayal perpetrated by the government of a civilized people in our generation.” Seventy years ago this week, England declared a new policy for Palestine: Jewish immigration would be restricted to just 15,000 annually for the next five years, and after that would be permitted only with the agreement of Palestine’s Arabs.Just six months after the Kristallnacht pogrom, with German Jews desperately seeking a haven and country after country shutting its doors, the British closed off the one land that offered the hope of refuge.

Weizmann rushed to London to plead his case before prime minister Neville Chamberlain. “The prime minister sat before me like a marble statue; his expressionless eyes were fixed on me, but he never said a word,” Weizmann later recalled. “I got no response. He was bent on appeasement of the Arabs and nothing could change his course.” Well, maybe not quite nothing.

The British were, after all, in a particularly vulnerable position in May 1939. Two months earlier, Hitler had completed his dismemberment of Czechoslovakia, leaving the Munich agreement in tatters. War with England seemed inevitable. “London was in such dire need of American support,” the historian Selig Adler has noted, “that a strong dissent from Washington would have probably forced a British reversal” of the White Paper. 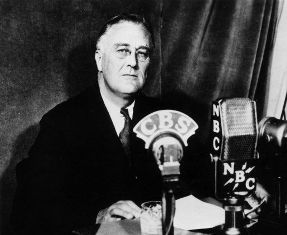 American Zionists thought likewise. In the weeks before the publication of the White Paper, US Zionist leaders repeatedly urged president Franklin Roosevelt to intervene against the anticipated British action. The Jews closest to FDR, Justice Louis Brandeis and Rabbi Stephen Wise, begged the president to step in. Roosevelt tended to deflect these kinds of requests with a dose of charm. Calling Wise “Stevie” made the American Jewish Congress leader feel he was a personal friend of the most powerful man on earth. “The president glad-handed Zionist leaders,” Prof. Adler recalled. “He would pacify his Jewish visitors with promises… but then failed to put these pledges into the executive pipeline.”

To be sure, Roosevelt was not happy about the rumored new British policy on Palestine. He instructed the State Department to inform London that the US hoped “no drastic changes” were in the offing. In a memo to secretary of state Cordell Hull on the day the White Paper was issued, FDR called it “something that we cannot give approval to.” But there is a huge difference between “not giving approval” and expressing forceful, explicit disapproval. The British took note of Roosevelt’s minimalist response and dug their heels in accordingly.

WOULD A DIFFERENT response by FDR have persuaded London to backtrack? An episode from 1936 may be instructive. That summer, the British were preparing to slash Jewish immigration to the Holy Land. Rabbi Wise appealed to Roosevelt to intervene, and with Election Day just a few months off, the president leaned on the British to relent. The restrictions were shelved. As a result, Wise biographer Melvin Urofsky notes, in the next three years, “more than 50,000 Jews, mostly from Germany and Austria, were able to join the Yishuv – men, women and children who would undoubtedly have perished had the 1939 White Paper been issued three years earlier.”

It’s true that 1939 was not the same as 1936. By 1939, Britain was close to war with Germany and was deeply worried about which side the Arab world would take in such a conflict. Supporters of the White Paper said the restrictions were needed to keep the Arab world from erupting in revolt.

But would there really have been such a serious Arab reaction if Jewish immigration were allowed to continue during the Holocaust years? In her autobiography, Golda Meir characterized British fears of an Arab revolt as wildly exaggerated: “A few Arab leaders might have made threatening speeches. Perhaps there would have been a protest march or two. Maybe there would even have been an additional act or pro-Nazi sabotage somewhere in the Middle East… But thousands more of the 6 million might have survived.”

Despite the logic of Meir’s argument, the British White Paper went into force. And Roosevelt was silent.

The history of FDR’s response to the persecution of European Jewry is littered with empty promises, unfulfilled hopes and missed opportunities. Seventy years ago this week, one of the most important of those opportunities was squandered, and on the eve of the Holocaust, one of European Jewry’s last avenues of escape was almost completely shut off. The consequences were catastrophic.

The author of this article, Rafael Medoff, is director of the David S. Wyman Institute for Holocaust Studies.