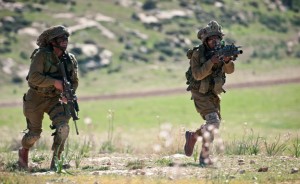 A Palestinian terrorist was killed tonight in an exchange of fire between terrorist and an IDF force near Kfar Turmus Ayya in the Binyamin region, North-East to Ramallah. No injuries among the IDF soldiers were reported. Two additional terrorists involved were arrested.

Yesterday morning two Palestinians were killed in an exchange of fire with security forces in the refugee camp Kalandia while the house of the terrorist who killed Danny Gonen z”l was being demolished.

Combat soldiers from the engineer force of the IDF arrived in Kalandia to destroy the house of Muhhamad Abu-Shaheen who carried out the shooting terrorist attack that killed Gonen and injured another man near Dolev. While demolishing the house, armed terrorist opened fire on the IDF force and they responded with fire. Two Palestinians were killed in this incident and no injuries among IDF soldiers were reported.

The spokesperson of the IDF said that in this incident violent disturbances were developing involving hundreds of Palestinians who were throwing homemade bombs and stones at the IDF force. The IDF force responded with non-lethal weapons designed for dispersing riots.