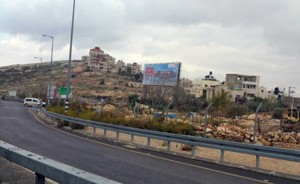 Earlier today, a Palestinian, who has now been identified by Palestinian news agencies as Mazin Hasan Ureiba from Abu Dis, injured two Israelis, one soldier and one civilian, when he opened fire at the Hizma checkpoint. The soldier sustained minor injuries. The Israeli civilian, a 47-year-old man, was transported to Hadassah Medical Center. Ureiba was eliminated by security forces at the scene.

From the initial investigation, it appears that the terrorist arrived in a blue Hyundai vehicle to the Hizma checkpoint. The car stopped for inspection and when one soldier began to check it, another was guarding him. The soldier who was inspecting the car took the ID card of Arabia and then went to the trunk to inspect it. All of a sudden, the driver exited the vehicle and pulled a gun and shot the soldier who was near the trunk. Two security guards shot the terrorist immediately and eliminated him. The soldier sustained minor injuries in his hand.

Ureiba was an officer in the Palestinian Authority general intelligence service and a father of four, sources told Ma’an News.
Photos released following the incident suggest the attack may have taken place down the road from the checkpoint.
{Matzav.com Israel}