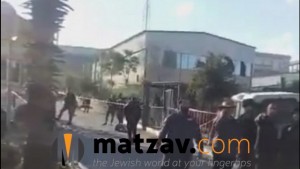 [Video and update below.] Two Israeli security guards have been seriously wounded in a stabbing attack in Ariel area in the Shomron. The attack took place shortly after 9 a.m.

The Arab terrorist was shot and wounded, and was subsequently pronounced dead moments later.

The attack took place at the Barkan junction at the entrance to the West Ariel industrial zone, which houses a number of factories that employ both Israelis and Palestinians.

Both victims were fully conscious when they were rushed to Beilinson Hospital in Petach Tikva, an MDA spokesperson said.