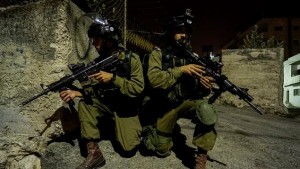 Three Israeli soldiers were wounded by gunfire Tuesday night during an arrest operation in the Qalandiya refugee camp, north of Yerushalayim.

The three suffered bullet wounds to their limbs, and were evacuated to hospital to receive treatment.

In a second incident, another driver attempted to run over soldiers in the refugee camp. He too was shot and killed. No troops were wounded in that instance.

Throughout the operation troops clashed with dozens of rioters in the refugee camp.