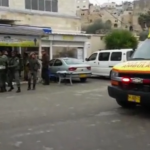 [Updates below.] There are initial reports of a shooting attack in the Har Chevron region in the West Bank.

One person is lightly injured, according to Army Radio.

Update: The Israeli man who was lightly injured in the West Bank shooting attack is an IDF soldier, who was shot in the foot.

This is the second time today that an Israeli man has been wounded in a shooting attack by Paelestinian terrorists.

Update: The Israeli soldier was shot at the Hakvasim Junction in the south Chevron Hills. IDF troops are searching for the suspect.

Earlier today, an Israeli man was wounded in a stabbing attack in Yerushalayim. The terrorist was captured not far from the scene. The attacker arrived at a bus stop on Rechov Barazani, where he took out a knife and tried to stab a civilian waiting for the bus. The knife failed to break the skin, and the attacker then fled the scene.

Earlier, a female soldier was wounded in a shooting attack near the Meoras Hamachpeilah in Chevron. Israeli security forces were searching the area for the shooter, fired from one of the surrounding Palestinian homes.