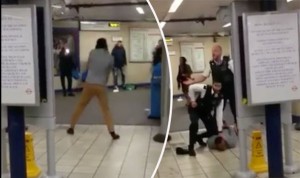 London  – A man was stabbed in the ticket hall at Leytonstone station in Lodnon this evening by another man who witnesses say shouted “This is for Syria” as he slashed his throat.

Another three are thought to have been injured.

The Met Police said its counter-terrorism command unit is now investigating the incident.

Police said they used a taser on the suspect as he threatened others with a knife, before they managed to arrest him.

The victim was rushed to hospital in a serious condition with multiple stab wounds, paramedics said.

Frightened witnesses described how their normal night out turned into a horror show.

One said the victim was an “elderly” man with a younger female family member while another said the man had a long knife, which looked like a machete.

A video taken by another witness shows a big pool of blood just outside the ticket barrier as police confront the attacker, then taser him before putting handcuffs on him and arresting him.

One witness, who did not want to be named, said: “So as I was going to Leytonstone station was dressed to go to dinner with people from work.

“As I walked down I just saw a lot of people running but I ignored it and kept walking to get my train, but suddenly what I saw I couldn’t believe my eyes and what I saw was I guy with a knife and a dead guy on the floor.

“I was so scared I ran for my life. After good 10-15 police came and got the guy and arrested him.

“And as he was coming out this is what he said, ‘This is what happens when you [mess] with mother Syria all of your blood will be spilled.'”

Evitri Payet said fellow witnesses were shouting at the suspect: “You’re not Muslim.”

People who had just got off the Tube ran back onto the train in a bid to escape the attacker.

“We are treating this as a terrorist incident. I would urge the public to remain calm, but alert and vigilant.

“The threat from terrorism remains at severe, which means that a terrorist attack is highly likely.

“I would appeal to anyone who was in the vicinity of Leytonstone underground station earlier this evening at around 7pm who saw anything suspicious to call the anti-terror hotline on 0800 789 321.

“Anyone who may have captured video or photographic footage of the incident is also urged to make contact with the Counter Terrorism Command via the Anti Terror hotline.”

Read more at the Sunday Express.