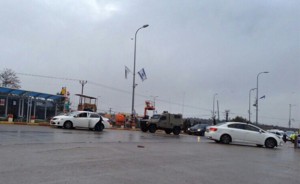 As reported earlier, a Palestinian terrorist armed with a knife tried to stab several Israelis in Gush Etzyon Tuesday morning. Initial investigations reveal that the terrorist was trying to stab an Israeli man standing at a hitch-hiking post.

Israeli Security Forces identified the terrorist, opened fire on him and eliminated him. Another person was slightly injured in the incident.

At around 7:48am, Magen David Adom reported a stabbing attempt in the Yerushalayim area. Medics and paramedics rushed to the scene in order to provide medical care and evacuated a 40-year-old man in mild condition to Hadassah Hospital at Ein Kerem.

Around the same time, as reported here on Matzav, a 25-year-old was stabbed and injured in Bais Yisroel, Yerushalayim, near Yeshivas Mir, but the incident was deemed non-terror-related.