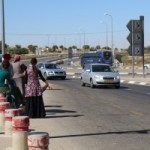 One Israeli was injured this morning in a stabbing incident at the Gush Etzion Junction south of Yerushalayim, the army said.

Times of Israel reports that soldiers shot the knife-wielding attacker, who approached people waiting at a hitchhiking stop.

The Israeli man was injured by the gun fire directed at the attacker, police said.

Magen David Adom said paramedics arrived at the scene and treated a man, said to be in his 40s, who was suffering from a light injuries to his hand. They then evacuated him the the Hadassah Ein Kerem Hospital in Yerushalayim.