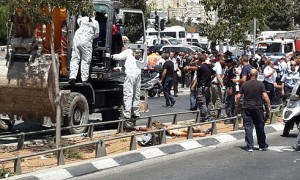 [Update below.] A pedestrian was killed and six other people were wounded Monday afternoon when a terrorist went on the rampage in an industrial digger in central Yerushalayim.

One Israeli was murdered and five were wounded this afternoon when Muhammad Naif Ja’abis, of the Jabel Mukaber neighborhood in Jerusalem, drove a tractor and rammed it into a bus, turning it over and hitting a pedestrian. He was stopped after a police officer shot him dead. Another police officer was wounded while attempting to stop the terrorist.  The bus was fairly empty and so there were fewer casualties.

The attack occurred on Shmuel HaNavi Street, just outside the Olive Tree Hotel.

“A police officer at the scene stopped his car, got out, neutralized the terrorist and thus prevented a further attack,” the Jerusalem Police Spokesperson’s Office stated shortly after the attack.

Jerusalem has known other such attacks by Arab terrorists. In the summer of 2008, tractors were used to carry out two separate terror attacks in Jerusalem in the space of three weeks. In 2009, a tractor plowed into a police car on Menachem Begin Boulevard in Jerusalem. The driver was apparently also trying to hit a nearby bus, but missed. Two police officers were in the car when it was hit and both sustained mild injuries. Other police officers nearby shot the terrorist.  In October 2013, a Palestinian was shot dead after he rammed a tractor through the main gate of an army base located north of Jerusalem.

UPDATE: Reb Avrohom Wallis z”l, a 29-year-old chossid of Toldos Aaron, was killed in the accident.

He worked as a mashgiach for Asrah Kadishah at the construction site where the attack took place and also worked for the family Wallis tzitzis company.

He is survived by his parents, Rav and Mrs. Shimon Wallis, and his wife and six children. .