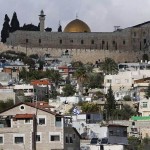 An Israeli Arab terror cell in Yerushalayim was uncovered by the Israeli Shin Bet security service and police force recently. The suspects who were arrested were involved in many attacks in the recent terror wave.

The investigation found that Islam Najar, 18, and Hamza Naja, 22, brothers from Ras-Al-Amud, a neighborhood in eastern Jerusalem, as well as Nader Nasser, 22 and two minors aged 16 and 17 were all involved in several Molotov cocktail and rock-throwing attacks against security forces and Israeli citizens, the Shin Bet said.

Along with other terror cell members, the two minors recently overtook an Israeli Egged bus and burned it to the ground after the bus driver fled.

In order to attract police during riots, the terror cell suspects would block off traffic in the streets, burn trash cans, cut electricity, and then attack security forces with firebombs.