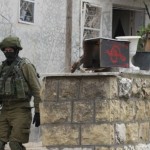 Less than an hour after a stabbing in Shomron, a Palestinian man attempted to stab soldiers with a screwdriver in Chevron. He was shot and killed.

The army said the attacker, “armed with a screwdriver, approached a checkpoint near Chevron and attempted to the stab security forces.”

The soldiers opened fire on the man, killing him, the IDF said.