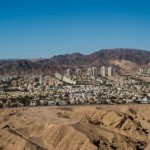 Both are suspected of conspiring to aid the enemy in wartime for reportedly planning to bomb a hotel in Israel’s southernmost city of Eilat.

Another incident of terror activity planned by Israeli Arabs was recently released for publication as well. Four residents of Jaljulia, an Arab town in central Israel near Kfar Saba, were arrested in November for arms trade and for involvement in disorderly conduct the previous month.

The indictment also indicates that Khalil originally proposed to commit a stabbing attack against a religious Jew. Ashraf apparently rejected the idea, arguing instead for a much bigger and more significant attack. Ashraf suggested a plan that Khalil agreed to, in which they would plant a bomb in a hotel in Eilat.

The defendants made a number of preparations in order to implement the attack, among which included observations of the hotel from outside and gathering information on a religious group that planned to stay at the hotel. One of the defendants also watched Internet videos that showed how to construct a bomb.

On November 30, Ashraf arrived at the hotel in order to gather information and make preliminary preparations for the attack. He created the false impression that he was interested in renting a hotel room for a certain period of time and asked to see the different rooms of the hotel to make a decision. Ashraf said that he was interested in taking a room located below the dining room, where he was reportedly planning to hide the bomb.

It was Ashraf’s questions regarding the hotel’s several entrances, overall occupancy, and of the religious group staying at the hotel, that aroused the suspicions of the receptionist and housekeeper.

After Ashraf left the hotel, the receptionist and housekeeper alerted hotel management and security of their suspicions, which led to the arrest of Ashraf and Khalil.

The case was investigated by the Israel Security Agency and Israeli police units in the south.

Another incident of terror activity planned by Israeli Arabs was recently released for publication as well. Four residents of Jaljulia, an Arab town in central Israel near Kfar Saba, were arrested in November for arms trade and for involvement in disorderly conduct the previous month.

Yahya Abu Hajla, Firas Feki, Muhammad Fayoumi and Udai Harbush, all Israeli citizens residing in Jaljulia, were arrested in a joint operation of the Israel police and the General Security Service (Shin Bet).

The four were involved in violent riots, tire burning and rock throwing at police forces during the recent October events. Their interrogation further revealed that they planned to shoot at a police vehicle or to burn down the local police station using Molotov cocktails, but eventually backtracked due to fear of being caught.

The Shin Bet said in a statement, that it is likely that their arrest “prevented a further and more significant involvement in terrorist activity.”