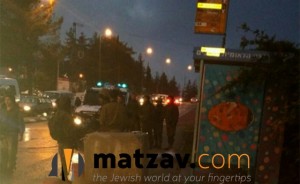 An attempted terror attack in Gush Etzion was thwarted today. Israeli Security Forces eliminated the terrorist as he was trying to carry out a stabbing attack in the area.

There were no injuries in the incident.

The initial investigation reveals that the terrorist approached a bus stop in Gush Etzion. After the terrorist drew his knife, he was shot and eliminated by the Israeli Security Forces.

Yesterday, an Israeli Border Policeman was critically injured in a terror attack.