The 17-year-old victim of a stabbing attack in Yerushalayim on Shabbos afternoon is a recent US immigrant to Israel, who says the incident will not deter him from joining the Israel Defense Forces.

Aharon Pomanski, who came to Eretz Yisroel just over a month ago, told Ynet news he hopes to enlist in the IDF’s top commando unit, Sayeret Matkal.

“I was stabbed, but I’ll still enlist in the army and give it my all,” he said. “I’m not afraid of anything.” 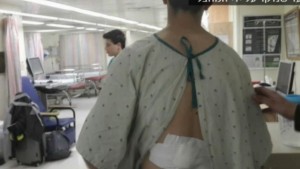 The teen said that he and a friend were surrounded by dozens of Arab youths as they returned from the Kosel on Shabbos afternoon.

The youths were taunting them, and two of them had knives drawn, he said.

“It seemed like they wanted to kill us,” he said. “I didn’t see them come at me, and I only realized I had been stabbed when I saw blood and them running away.”

His friend managed to escape and alert nearby police officers. The wounded youth was taken to Hadassah University Hospital on Mount Scopus for treatment for back wounds.

Security forces launched a manhunt for the assailants, and hours later police announced the detention of two minors from East Jerusalem who matched the descriptions of the attackers. They were handed over for interrogation.

Both suspects are 15 years old, according to reports.

All are asked to daven for the full recovery of Aharon ben Devorah.