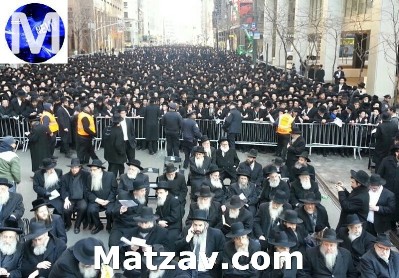 [Photos below.] New York, NY – Anywhere from 50,000-150,000 people heeded the call of the gedolim both in America and Eretz Yisroel to attend a massive atzeres tefillah this afternoon in Lower Manhattan’s Financial District. Yidden came by car, bus, train, and even boat and highways ferry to be mekadesh Shem Shumayim.

At the atzeres, the tzibbur was mispallel to Hashem to negate the plans of Israeli politicians who have proposed a law designed to severely limit the growth of Torah in Eretz Yisroel. The proposed law would not only abandon Israel’s longstanding exemption of full-time yeshiva students from military service, but it would expose bnei Torah who refuse as a matter of religious principle to be drafted into the military to potential criminal sanction.

With the atzeres tefillah, American Jewry joined in solidarity with the hundreds of thousands of Jews who gathered in the streets of Yerushalayim last week to pour out their hearts in tefillah and to express their pain and protest regarding this proposed new law.

The asifa took place on Water Street in lower Manhattan between Fulton Street and Broad Street.

The event began at 2 p.m. with Minchah, led by Rav Yosef Frankel, Vyelipoler Rebbe; followed by Tehillim and tefillos b’tzibbur.

Rabbi Chaim Dovid Zweibel, Executive Vice President of Agudas Yisroel of America, concluded the event with the reading of a prepared statement.