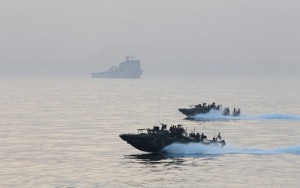 Two U.S. Navy boats in the Persian Gulf were seized by Iran when the country said the vessels entered their territorial waters. The U.S. military could not say whether Islamic Revolutionary Guards Corps naval forces were involved or another Iranian naval unit. The Pentagon also could not say whether a warning shot was fired or how exactly the Iranians took custody of the sailors.

The incident began Tuesday afternoon when the U.S. military lost contact with two Riverine boats and sought to contact them. Defense officials said one boat suffered a mechanical failure, which may have included navigation.

The Pentagon said the Iranians promised to allow them to continue the travel from Kuwait to Bahrain, “promptly” but could not say when that could happen. The sailors are now on Farsi Island, according to defense officials.

Secretary of State John Kerry made a call to his Iranian counterpart, who gave assurance that the issue would be resolved in short order. Kerry was with Secretary of Defense Ash Carter at the time. The sailors are being held until tomorrow for safety reasons as it is the middle of the night on Farsi Island currently. It is unclear whether U.S. military has begun contacting the families of the sailors.