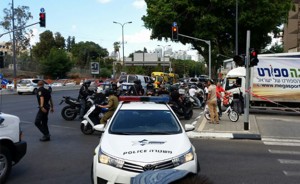 Vigilance displayed by citizens in light of the wave of terrorism that struck the country manages to prevent Palestinian attacks sometimes, as happened on Shabbos following a report received by the police about a suspicious young man who appeared in the heart of Tel Aviv.

Around 3 P.M., Israeli police received a report on a young man walking around on a busy street suspiciously. Police officers called to the scene saw a young man holding a screwdriver. After some time, they were able to arrest him.

The suspect is a 17 year old resident of the village of Yatta, near Chevron. When he was arrested, he told police that “he wants to die because his uncle was also killed.”

He was taken to a Shin Bet interrogation.

Interrogators will examine whether this young aspiring terrorist planned to carry out an attack as part of the current wave of terrorism.