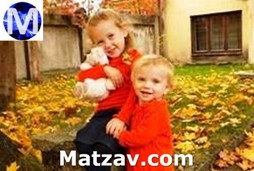 Tefillah is the only hope, say R’ Shimon and Michal Gross of Yerushalayim, whose sons, Yitzchok and Michoel, remain hospitalized in serious condition.

This past week, the Grosses buried their 2- and 4-year-old daughters, Yael and Avigail a”h (shown in photo), who passed away after being accidentally poisoned on Wednesday after an exterminator left a chemical agent, Phosphine, behind.

“I feel the embrace of Klal Yisroel and I thank everyone. Only tefillah will help [for the boys],” said Michal.

Among those who called the Grosses to be menachem avel was Prime Minister Bibi Netanyahu.

At the kever of his daughters following the kevurah, R’ Shimon said. “Avigail and Yael, go before the Kisei Hakavod, you, babies who never did aveiros and are pure, and beg for rachamei Shomayim for your brothers.”