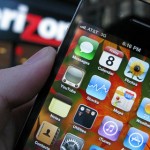 U.S. wireless carriers send your e-mails and Instagram likes across specific slices of the electromagnetic spectrum: the ones they’re licensing from the government for billions of dollars. But there’s an unlicensed range, and Verizon is leading carriers in a push to equip phones with chips that will let them make use of these free airwaves. The company says doing so will help clear cellular congestion and keep the Internet working at top speed as data use climbs ever higher. “Unlicensed spectrum is going to be an important part of providing a better mobile broadband experience for our customers,” says David Young, Verizon’s vice president for public policy.

That sounds great, say Google, Microsoft, Comcast, and others, except for one thing. The proposed system, called LTE in Unlicensed Spectrum or LTE-U, which relies on a combination of new, small cell towers and home wireless routers, risks disrupting the existing Wi-Fi access most people enjoy. For several months, the three companies have been among a group lobbying the Federal Communications Commission to delay LTE-U’s adoption pending further tests. All three declined to comment for this story, referring instead to an Oct. 23 FCC filing they joined that claims LTE-U “has avoided the long-proven standards- setting process and would substantially degrade consumer Wi-Fi service across the country.”

Both sides say they have research backing their assertions about LTE-U; it’s either effective and foolproof or an impending disaster, depending. Both camps are also criticizing the other’s methodology and assumptions, and it’s tough to find an expert who doesn’t have a stake in this argument. So far, the FCC says it intends to let the companies work things out among themselves, though agency spokesman Neil Grace says his bosses are “closely monitoring” the debate.

In decades past, unlicensed airwaves were mostly known for their use by garage door openers, cordless phones, and the occasional baby monitor. Now they’re full of traffic—Wi-Fi networks that connect smartphones, laptops, set-top boxes, game consoles, and a whole host of smart devices to the Internet. Those gadgets and the traffic they carry, an essential part of how Google, Microsoft, and Comcast make money, pump about $222 billion into the U.S. economy every year, estimates industry lobbyist WiFiForward.

Verizon and other wireless carriers run central scheduling software that tells each phone when to transmit on a particular bandwidth, like air traffic control for phone signals. Wi-Fi networks typically rely more on a kind of listen-before-talking system, with each device checking a desired slice of spectrum to make sure it’s available.

Verizon and other carriers say delay is pointless—as does Qualcomm, which makes the chips that enable LTE-U. “We have a capability that we’ve proven can coexist, and we’re ready to go with it,” says Matt Grob, Qualcomm’s chief technology officer. “We don’t want to wait. Our partners, they don’t want to wait.”

Paul Nikolich, who heads the Wi-Fi committee for the Institute of Electrical & Electronics Engineers, a standards- setting body, says Qualcomm and the carriers should submit their evidence to his committee for review. That’s the usual process for mass adoption of new Wi-Fi technologies, which often takes a year or longer. “The people who have looked at it very carefully are very concerned they will gobble up more than their fair share of spectrum,” says Nikolich, a consultant and investor in Essex Fells, N.J.

LTE-U may also act as a disincentive for companies experimenting with Wi-Fi phone calls, including Comcast, and those dabbling in fiber networks, like Google. Cisco Systems is arguing both sides, writing in a June filing to the FCC that regulator interference can lead to unnecessary delays but that companies developing technologies rarely prioritize peaceful coexistence with rival systems.

“Wi-Fi is acting as a counter to the consolidation we see in mobile networks,” says Dean Bubley, founder and head of consulting firm Disruptive Analysis. Regulators should make sure to keep that counterweight in place, he says, especially since carriers haven’t demonstrated serious trouble with cell capacity. “There is a distinct risk of tragedy of the commons here,” he says.