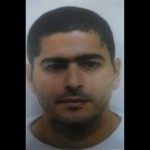 Approximately an hour and forty minutes after Nashat Milhem killed three people in Tel Aviv on January 1, the fugitive gunman was already hiding out in his hometown of Arara in northern Israel.

The 29-year-old Milhem, who gunned down two people at a bar and a taxi driver, immediately fled to the village using a friend’s car, a strong indication that he had planned his getaway in advance, Channel 10 reported Sunday.

Security officials said Milhem initially hid outdoors, then in an abandoned building, and finally in an apartment belonging to a relative of his, where he was cornered Friday afternoon and shot dead after opening fire on security forces who came to arrest him.

Initially, officials believed Milhem was hiding in the Tel Aviv area, sparking a city-wide search for the fugitive gunman, before they closed in on him in the village several days into the week-long manhunt.

On Monday, police found evidence indicating Milhem was in Arara in the form of a cigarette butt and excrement, which were tested and found to match his DNA.

Milhem’s exact whereabouts were made known to police after he broke into his relative’s home on Thursday night. Relatives alerted the lawyer who was appointed to the gunman’s father, Mohammed Milhem, after the father was arrested on suspicion of being an accessory to the murders and of obstructing the investigation.

On Friday morning, Mohammed Milhelm reportedly gave public defender Nechami Feinblatt his consent to alert police and the Shin Bet security service to the fact that his son was in Arara.

However, according to one resident of Arara, Milhem’s family members knew all along where he was hiding. Other residents said Milhem had been receiving food and other assistance from people in the area.

Officials hinted that they had delayed closing in on Milhem in order to also be able to identify and ultimately arrest people who helped him while he was hiding out. Five Arara residents suspected of assisting Milhem either before or after his killing spree were in police detention Sunday.

Police allowed reporters into Milhem’s hideout apartment on Saturday. It was well-stocked with food and water, had a TV set and a radio, and also contained the black clothes he used when he went on his shooting spree last week.

The building was surrounded on Friday afternoon, and according to police, Milhem spotted the forces converging upon him. He fired on them from the window of the apartment, fled the building, and ran some 200 meters, jumping over a low wall into the yard of an adjoining building, security officials said. He fired on the forces chasing him, including at the lead officer and at a search dog (who were not injured), and was gunned down. The forces had been ordered to take him alive if possible.

Milhem will be buried in Arara in a small, private ceremony today to avoid drawing negative attention to the family, relatives said.