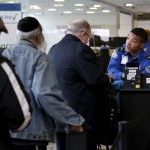 As soon as next year, a driver’s license may no longer be enough for airline passengers to clear security in some states, if the Department of Homeland Security has its way.

Federal officials said they would soon determine whether Transportation Security Administration agents would start enforcing a 10-year-old law that requires states to comply with a set of federal standards when issuing driver’s licenses.

The issue is quickly coming to a head, and the debate over identification and privacy has only intensified following the recent terrorist attacks in Paris and California.

But some states have bitterly opposed these requirements out of privacy concerns, and more than a dozen have passed laws barring their motor vehicle departments from complying with the law, according to the National Conference of State Legislatures. The new standards require more stringent proof of identity and will eventually allow users’ information to be shared more easily in a national database. Read more here.