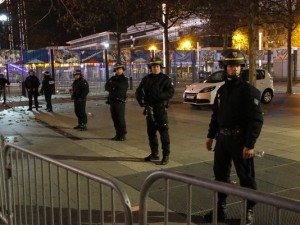 In an exclusive interview with JerusalemOnline, Syrian political dissident Aboud Dandouchi believes that it was just a matter of time before ISIS attacked Europe: “ISIS hates the idea of Europe serving as a sanctuary for Muslims. Their view of the world is the Muslims verses the rest and they would like nothing better than to provoke a backlash in Europe against the refugees. They want their Caliphate to be the only place where Sunnis can look for refuge and Europe should have seen this coming. Since last summer, anti-Semitism has been building up. It is an environment conducive to such attacks. You can’t ignore anti-Semitism and then think terrorists won’t be emboldened in Paris.”

Dandouchi stressed that the Jewish people are always the first target but they are never the last: “It has happened again and again throughout history. What happened after Charlie Hebdo? Nothing! People went out and bought issues of the magazine but they still tolerated hate speech and acts of anti-Semitism in their midst. You don’t fight against terrorism with big Police operations after the fact. You nip it in the bud by rejecting it and confronting it every day. Ordinary people have a crucial role to play in containing extremism. If it comes in a million man march after the fact, it is already too late.”

According to Dandouchi, by not confronting extremism in European society as early as last year, “Europe missed the signs. Extremism always starts with anti-Semitism. It’s not a problem just for the Jews. It’s a symptom of something much worse to come and frankly, Europe’s response to the growth of anti-Semitism has been appalling. People don’t just make the jump from normal dude to bloody maniac. There are a lot of steps in-between. If you see a Jew being accosted in the street, don’t be silent. If a bunch of thugs try to intimidate a Jewish restaurant, go eat there.”

“I’ve seen how a society becomes extremist,” Dandouchi related. “Grievances that initially could be handled rationally get high jacked by people with an extremist agenda, who then fan the flames of tension and hatred until the middle ground is burned away and everyone is only left with the extremist sides. In the end, ordinary people from both sides feel that they have to join the extremists for their own self-preservation. It should never be allowed to get to that point.”

Dandouchi noted that Europe’s refugee policy is not helping the situation: “The open door policy is no longer tenable. It is not good to say we will accept the refugees but only if you make it here. Who can make the big trip to Germany? The young, the fit, those with means and so, the neediest end up not even being saved. The most vulnerable can’t possibly make it to Europe.” Dandouchi believes that Europe should help the most vulnerable elements of the Syrian refugee population such as widows, young children and Yazidis but older single men in their 40’s who are healthy should be scrutinized more heavily: “I don’t mind being vetted for an extended period of time if it will maintain the integrity of the process. Europe’s current approach is not utilizing resources effectively to save the most vulnerable” and gives ISIS terrorists a widow of opportunity to make it into Europe.

Dandouchi was asked how Europe should deal with the present situation given that already a great many Syrian refugees have already made their way to Europe and some of them might be with ISIS. He replied that it is a difficult question to answer because even if ISIS is eliminated next week and no longer controls any territory, their hatred will live on and this makes it very difficult to deal with them: “ISIS is no longer primarily about land. It is now an ideology that lives in the minds of the Caliphate want to be’s all over the world. ISIS lost Sinjal this week. They could lose Mosul and Raqqa. But by now, their ideology has taken hold.” In conclusion, he noted how even after Nazism was politically defeated, there are still people that support Nazism today and Dandouchi believes it will be the same with ISIS.